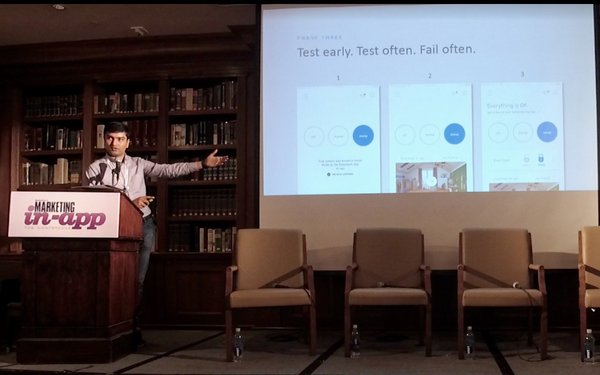 SimpliSafe wanted to learn how it could better secure homes using its app.

Rahul Subramany, Senior Product Manager, SimpliSafe, told our Marketing In-App conference in New York today the company traveled through several major phases, including reflection on how its app could help make every home secure. "Where does our app fit in?" he asked. "Where were we doing well?" The company knew it was doing well at its primary job but it was the only key task it was doing. Certain other tasks were taking too long and others couldn't be done.

Most of the brand's customers are new to the category, buying their first home security system and SimpliSafe was not doing a good job at onboarding those users. So it talked to its engineers and marketers and looks at its App Store ratings for insights. It found its customer service was not what it could be.

In getting user feedback, SimpliSafe interviewed current customers at all levels as well as competitors' customers. It focused on the emotions customers were having with home security. It asked users to design the app of their dreams to understand their priorities and how these features could translate to a wider audience.

As for metrics, Subramany said the company sought a balance between experience and business KPIs and measured a happiness score using App Store ratings with focus on each app initiative.

Next, it had to convince the organization to build all of this, "not an easy thing to do," he said. One of the key learnings was that the app actually sold the long-term impact of initiatives. Some users wanted short-term information only but SimpliSafe learned that if a customer had a break-in, that short-term info ("battery is working," for example) would be useless. So it kept the long-term perspective in mind when designing the app.

Upon implementation, it tested early and often. "Our mantra was to test a lot so you learn from failing," said Subramany. One example was in changing the background color. The user base didn't like it but the new users overwhelmingly preferred it, demonstrating how a short-term pain can turn into a long-term gain.

CNET and PC Magazine have called SimpliSafe the best in the home security category.

The app is #1 in its category in the App Store.

Set a high bar for yourself.

Bias decision-making toward building the right product and features.