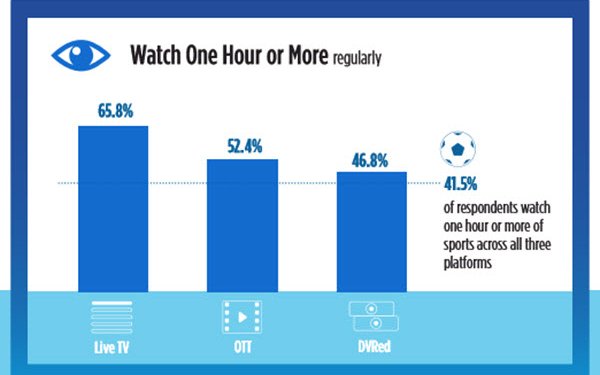 OTT viewing time is starting to approach that of live TV, according to TiVo’s Video Trends Report for second quarter 2019 (chart above).

TiVo, which has been conducting quarterly consumer video trends surveys since 2012, issues reports twice yearly. For the Q2 research, a third-party surveyor polled 5,340 consumers 18 and older in the United States and Canada. TiVo analyzes the data.

Respondents were asked about their use of a wide variety of services and devices (on a one-by-one basis), including linear pay TV, OTT, both subscription-supported and advertising-supported (SVOD and AVOD) streaming, and free social media streaming channels (e.g., Facebook, YouTube).

North American households now use an average of 7.2 entertainment services -- up from 6.3 average services per household reported in TiVo research in 2018, and averages of about 4 and 5 services, respectively, in 2016 and 2017.

Looking at linear TV, this survey found 83% of respondents still having cable/satellite service. While only 27% reported being  “very satisfied” with these services, that’s up 9.4% from last year — perhaps a glimmer of positive news for linear. Meanwhile, customers saying they’re “very satisfied” with vMVPDs (virtual multichannel video programming distributors) like Sling TV, DirecTV Now and YouTube TV decreased by 37%: 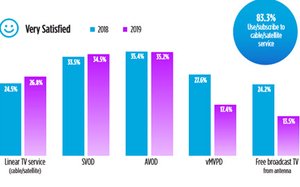 While big SVODs by and large continue to report increasing subscriber counts, 30.5% of these respondents still say they have no such subscriptions.

Those who use streaming services indicated that they spend the most time watching SVOD, followed by vMVPDs, and least on the still relatively new AVODs. But free video from social media platforms such as Facebook and Snapchat garner the most individual views per week, and follow close behind SVOD in time spent: 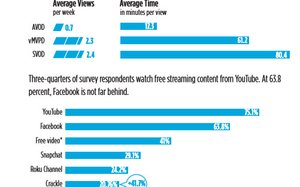 At the same time, the results indicate stalling or declining use of vMVPDs. The percentages reporting using YouTube TV declined from 12% last year to 8.5% this year; DirecTV Now from 6.3% to 4.3%; and PlayStation Vue from 4.4% to 3.3%. Use of Hulu+ Live TV and Sling TV were basically flat at 6.7% and 3%, respectively.

Also, adoption of linear AVOD services like Pluto TV and Tubi TV is growing (now at 18.5% and 16.2%, respectively), while adoption of TV network sites and apps is slowly declining:

When it comes to streaming devices, 34.9% said they don’t own one, while 22% said they use a device to access pay TV.

Asked which services they use to seek out content, respondents showed a clear preference for cable/satellite TV, SVOD services like Netflix and Amazon Prime Video, and free YouTube videos.

Nearly a quarter (23%) said they’d like their channel guides to get a new format “categorized into groups of movies and TV shows.” But 44.6% said they don’t want their guides to change, and 32.4% said they want to keep their old guide and add a differently formatted one.

Unsurprisingly, half (50.7%) said they want the ability to search for TV shows and movies across different platforms.

The full report can be downloaded from TiVo’s site.