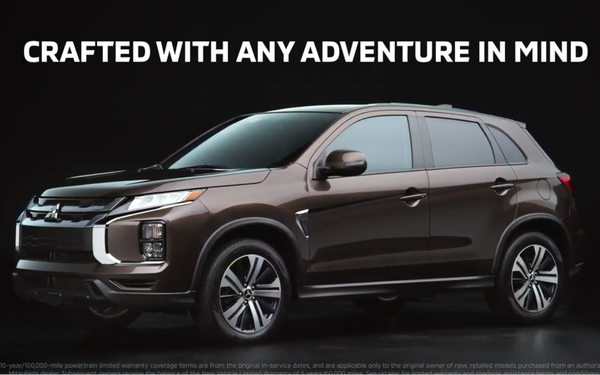 Mitsubishi Motors North America aims to break the mold for the typical outdoors-oriented SUV commercials, and instead remind consumers that adventure doesn’t always have to be about an epic trip into the wilderness.

In a campaign for its 2020 Outlander Sport, the automaker aims to show that "adventure is unique, curated, and different for every person.”

The campaign aims to portray the vehicle in “an authentic manner that speaks to its real-world versatility while highlighting its new front-end and latest safety features,” according to the agency.

Creative builds upon the “Small Batch” brand campaign that launched in April aiming to establish a new, sophisticated look and feel for the automaker, showcasing a small lineup of well-built vehicles that focus on the features that matter most to its drivers.

"Adventure Redefined" shows how the vehicle is the “perfect size crossover” to take passengers from “off road Saturdays” to “ice cream Sundays” and to “Manic Mondays.” Another spot, "Hungry for Adventure" plays up the vehicle's 30 mpg which makes it “hungry for adventure, but not very thirsty for gas.” A third spot, touts the vehicle's many safety features, “too many to list in this ad.” All spots end with the brand tagline, “Drive Your Ambition.”

The music is a remix of what was used in the original “Small Batch” spots, says Kimberley Gardiner, vice president and CMO for Mitsubishi Motors North America.

"Our plan is to keep using it as a base and remix/customize it for various creative executions," Gardiner tells Marketing Daily.

Currently located in Cypress, California and soon to be relocating to Franklin, Tennesse, MMNA is a part of the Renault-Nissan-Mitsubishi Alliance. Its mission is to develop “highly efficient, affordably priced new gasoline-powered automobiles, while using its industry-leading knowledge in battery-electric vehicles to develop future EV and PHEV models,” according to the automaker.