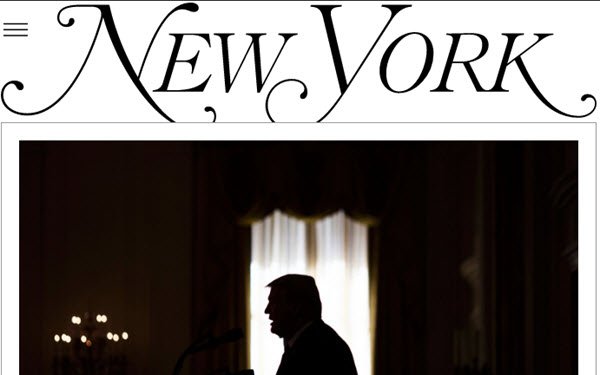 The buy is part of an ongoing push by Vox CEO and chairman Jim Bankoff to reduce its dependence on digital advertising by expanding its growing network of video, audio and other media offerings.

Vox is acquiring New York Media from The Wasserstein Family Trust, which became the owner when the company’s founder, Bruce Wasserstein, died in 2009. The magazine itself was launched in the 1960’s by Clay Felker, originally as a New York Herald-Tribune Sunday supplement. Wasserstein acquired it from Rupert Murdoch in 2004.

The value of the all-stock deal, first reported by The New York Times, was not disclosed.

New York Media’s properties include the biweekly print magazine, the magazine’s website and five website spinoffs (The Cut, Grub Street, Intelligencer, The Strategist and Vulture). In addition, just yesterday, the company announced that it is working with WME to form a TV and film production company that leverages its content assets.

New York Media’s CEO, Pamela Wasserstein, Bruce Wasserstein’s daughter, will continue to run the business, and will become president of Vox Media, with a seat on its board.

New York Media was reportedly losing as much as $10 million per year “until a recent upturn,” per the Times, but Wasserstein and Bankoff said the deal was borne not out of financial necessity, but the opportunity to attract more advertising through the scale and synergies of their combined assets. Bankoff said the editorial operations and staff will not be affected by the acquisition.

In addition to its flagship “explanatory journalism” site, Vox.com, Vox Media has launched The Verge and Polygon, and acquired brands including Recode, Eater and Curbed.

The companies said their combined sites will have an estimated 125 million combined unique monthly visitors.

Since taking charge in 2009, Bankoff has “reshaped Vox Media to rely less on digital advertising, and after expanding its video and podcast businesses, the company had a modest profit on $185 million in revenue last year,” reports the Times. The Vox Media Podcast Network includes more than 175 podcasts.

The company recently signed with Hulu to produce TV shows about food and family, and a production deal with Netflix for a series called “Explained.” In addition, its proprietary publishing platform Chorus announced earlier this month that it has partnered with Revolt, Sean “Diddy” Combs’s hip-hop media and TV content provider. Revolt also joins Vox Media’s advertising marketplace Concert as a partner of Chorus.

Times sources said that with the acquisition, Bankoff expects Vox Media — which was valued at $1 billion in 2015 — to remain profitable and exceed $300 million in revenue by the end of 2020, which would be on par with competitors such as BuzzFeed.