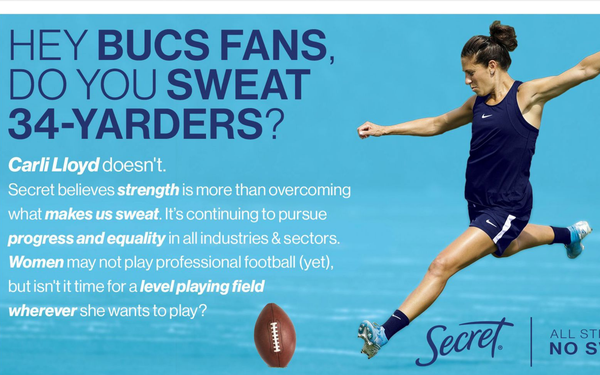 Field goal kickers are used to the disappointment — and boo birds — they experience when they miss an easy kick.

But Tampa Bay Buccaneers kicker Matt Gay, who muffed a 34-yard kick last Sunday that would have won the game for the team, is getting razzed by. . .  Secret deodorant.

It included a photo of U.S. women's national soccer team star Lloyd about to kick a football.  The ad text says, in part, “Women may not play professional football (yet), but isn’t it time for a level playing field wherever she wants to play?”

The photo of Lloyd had a double edge. Not only are women’s teams battling in court for equal pay, Lloyd  also kicked a 55-yard field goal during a practice session with the Philadelphia Eagles a little more than a month ago, and she makes no secret she’d like to get a chance to suit up for a pro football game for real. .

As for Secret, the ad fits with the brand’s larger involvement with women’s soccer, but more to the point, women’s equality issues.

In July, the brand donated $529,000 to the National Team, giving $23,000 to each of the 23 team members. An ad Secret ran then also emphasized that “23 pairs of chromosomes make up one winning athlete, female or male.” (The italicized emphasis was part of the ad.)

And earlier this month the P&G brand said it would buy 9,000 tickets to boost attendance at National Women’s Soccer League pro games played in nine different cities. At that time Sara Saunders, Secret’s associate brand director said in a statement, “As a brand for women run by women, we wholeheartedly believe women should not have to sweat gender inequality.”

Hence the controversial ads from P&G brand Gillette that attacked toxic masculinity and another ad for P&G brand My Black Is Beautiful titled “The Talk” that discussed how African-American parents are required to tell their kids how to act when they hear slurs or are stopped by police for traffic infractions. That ad was followed this year by “The Look” that shows a glimpse of bias, observing how black men are subtly treated differently in everyday circumstances by white people.