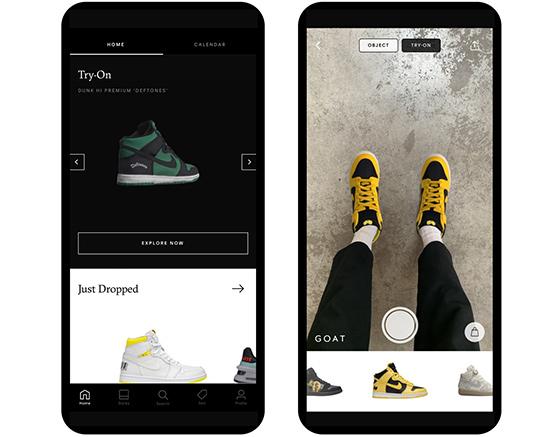 Augmented reality has been used to see virtual furniture in a room at home and to “capture” digital creatures in games like "Pokémon Go."

Now the technology is expanding to footwear.

Goat, a marketplace for buying and selling authentic vintage and new sneakers, is introducing an AR-powered try-on feature for sneakers.

These include a variety of Nike and Air Jordan styles, including some of the rarest Air Fore 1s, Dunks and unreleased samples.

Consumers with the Goat iOS mobile app can access the AR feature via the app’s homepage, pick a product and aim their phone at their feet to see what those sneakers would look like on them.

Earlier this year, Foot Locker made a $100 million strategic minority investment in Goat, which has been dabbling in augmented reality for some time.

Last year, the company launched an AR interactive map for consumers to explore destinations in a bid to win one of 1,000 prizes.

Goat also previously introduced an AR feature for consumers to see rare sneakers and get to know in detail the textures and materials used.

After all these years, companies are finally finding practical consumer uses for augmented reality.