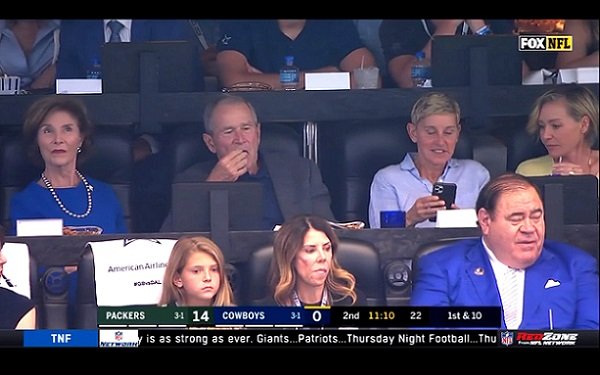 The court of social media public opinion has spoken: Ellen DeGeneres is to be praised for bringing conservatives and liberals together or vilified for appearing to enjoy herself while seated beside George W. Bush at the Cowboys game last Sunday.

Take your pick and choose your side. Like so much else in our national lives these days, there is little or no middle ground here.

The ex-president and current TV talk show host were spotted on camera at AT&T Stadium in Arlington, Texas during a Fox football telecast seated side by side in owner Jerry Jones’ luxury suite along with other guests, while the Cowboys played the Packers.

The former president was accompanied by his wife, Laura, and Ellen's wife, Portia Rossi, was there too (pictured above).

TV cameras caught Bush and Ellen having a lighthearted laugh, and after the sighting was shown on TV, and covered in other media such as USA Today, the vox populi weighed in with opinions both for and against.

For her part, Ellen issued a videotaped statement in which she understandably hoped to promote the point of view that there was nothing wrong with two people who seem to occupy opposite sides in the political spectrum enjoying each other's company regardless of their views.

“People were upset,” she acknowledged in the video that she posted this past Monday on her Twitter account. "They thought, why is a gay Hollywood liberal sitting next to a conservative Republican president? A lot of people were mad. And they did what people do when they're mad. They tweet.”

She then shared a tweet that was among the many that supported her that said: “Ellen and George Bush together makes me have faith in America again.”

“Exactly,” said Ellen. “Here's the thing, I'm friends with George Bush. In fact, I'm friends with a lot of people who don't share the same beliefs that I have. … But just because I don't agree with someone on everything [that] doesn't mean that I'm not going to be friends with them. When I say, ‘Be kind to one another,’ I don't only mean the people that think the same way that you do. I mean be kind to everyone.”

Those who posted angry tweets on Twitter, however, were in no mood to be kind to Ellen. “To be clear, this is not new for Ellen. [She] has long been instrumental in the living room resurrection of this war criminal into a goofy grandpa,” wrote one.

Other tweets called Bush a “homophobe” and “mass killer,” and accused Ellen of ignoring Bush’s record on everything from the War on Terror to gay rights. “Shout out to #EllenDeGeneres and all the other privileged liberals who have rehabilitated the reputation of this mass murderer and torturer,” read one typical tweet.

Ellen DeGeneres has made a great career out of being likable. She is a middle-of-the-road stand-up comedian who has worked hard to be offensive to no one.

And yet, even she is called upon to defend herself for the seat she chose (or was possibly assigned to) at a football game.