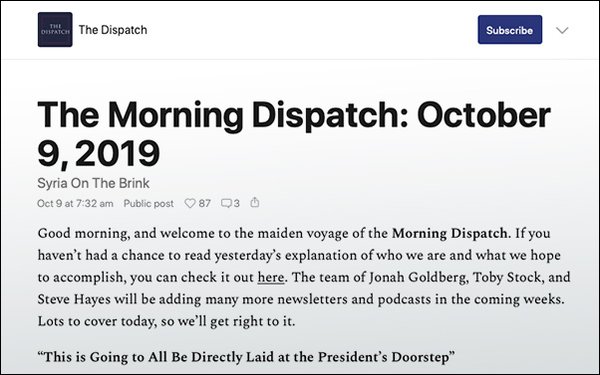 Stephen Hayes, former editor-in-chief of the now-defunct Weekly Standard, and Jonah Goldberg, formerly senior editor at National Review, want The Dispatch to target center-right, Trump-critical conservatives. In addition to the two, The Dispatch has six other full-time employees.

It will offer news and analysis on its website, as well as a daily newsletter called “The Morning Dispatch” (out tomorrow) and a podcast called “The Remnant.”

“This represents the first step forward for Substack in supporting group-based efforts on the platform,” according to a post on the Substack site.

Content will remain free until its full launch in January 2020. It will offer three stories a day, including one long-form piece, mostly behind a paywall.

More newsletters and podcasts will also roll out.

“We aim to make The Dispatch a place that thoughtful readers can come for conservative, fact-based news and commentary that doesn’t come either through the filter of the mainstream media or the increasingly boosterish media on the right,” reads an introductory post.

That's currently the only thing on the site from Goldberg, Hayes and cofounder Toby Stock, a former adviser at think tank American Enterprise Institute.

The Dispatch will rely on subscriptions for revenue, with no advertising.

“We are rejecting the advertising that makes clickbait seem so necessary,” they wrote in the post. “While we want as many readers as possible, we do not care a whit about traffic for its own sake. That’s why much of our content will be delivered via newsletters uncluttered with distracting ads...”

They added: “We won’t sell or rent our lists to low-class marketers, disreputable spam merchants or political groups seeking to make a buck on outrage.”

“We won’t subject our readers to auto-play videos, pop-up or pop-under ads or any of the clickbait boxes that even respectable news outlets use to monetize actual fake news.”

Substack announced this summer it had raised $15 million to grow its business.
email, politics, web sites
1 comment about "Conservative Site 'The Dispatch' Targets Trump-Critical Conservatives".
Check to receive email when comments are posted.
Next story loading