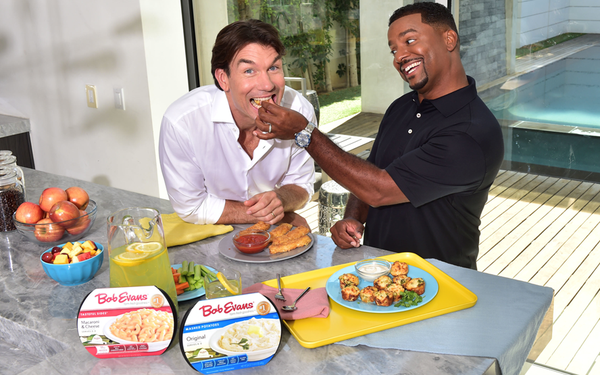 A new spot titled “A Sample To Remember,” depicting television personalities Jerry O’Connell and Alfonso Ribeiro as busy dads, is the first time Bob Evans has partnered with celebrities in an advertising campaign.

In the first of four commercials, O’Connell and Ribeiro, who were real-life acquaintances while growing up, literally run into each other in a grocery store aisle as they shop for dinner. They discover a woman offering samples of Bob Evans mashed potatoes and macaroni and cheese — then begin to clear out her stock before she summons security and they are escorted from the premises.

“We want to highlight busy dads and their roles in the family through fun banter,” Bob Evans vice president of marketing Thyme Hill tells Marketing Daily.

O’Connell most recently hosted the series “Jerry O” on select Fox-owned TV stations. Ribeiro is best known for his stints on “Fresh Prince of Bel-Air” and “America’s Funniest Home Videos."

Bob Evans’ target demographic is 25-54, and the first consumer segment the campaign targets is “life hackers,” described as busy, career-focused couples with kids.

“Their biggest mealtime challenges are feeling rushed and less than confident in their kitchen and, therefore, turn to prepared foods,” Hill says.

The second segment is food lovers. “Food is a key lens through which they explore the world, and they bring the whole family along on the journey," says Hill.

Created by Jekyll & Hyde Advertising, the first campaign commercial is running on national cable networks including USA, Hallmark, TBS and Food Network, along with local ABC, CBS, Fox and NBC broadcast affiliates. TV is being supported by a two-month campaign on Sirius Radio, as well as digital and social media.

With roots that date to the 1940s, Bob Evans Foods was acquired by Post Holdings in September of 2017 and renamed Bob Evans Farms. It’s the leader in the refrigerated side dish category, with a 56% share of market for the 52-week period ended Sept. 8, according to IRI.