The Senate Intel Committee released a bipartisan report Tuesday on Russia’s use of social media to influence U.S. elections and it appears likely to have the same impact that previous reports from the Senate, U.S. intelligence agencies, and even Special Counsel Robert Mueller conducted: not that much.

“After two-and-a-half years of hearings, there wasn’t a whole lot of solid, tangible ‘this is what we are going to do’,” Clint Watts said during a segment about the report on MSNBC Wednesday.

Watts, a former FBI agent who is an expert on Russia’s weaponization of social media, who is also quoted in the report, concluded: “When you look through that report, it looks like 2020 is going to look a lot like 2016.”

Actually, 2019 is already looking like 2020, as Russia's active measures continue -- especially the work of its Internet Research Agency to use social media to spread disinformation, including recent efforts to create division around the House’s Impeachment Inquiry.

At times, it almost seems as if the White House is working in conjunction with those efforts, and not just in the President’s incessant tweeting about it, or his public comments, but in paid-media buys on social media too.

The President’s reelection campaign is running ads on Facebook that make unsubstantiated corruption allegations about Democratic frontrunner Joe Biden. And despite a request from the Biden campaign to remove then, Facebook is continuing to run them, claiming it does not censure the ads of political candidates.

It’s the same argument that another social media platform -- Twitter -- uses to defend against complaints about the President’s use of his account. Twitter says it doesn’t censure or block “world leaders.”

“Facebook tells me its policy is that Trump (and other political figures) CAN LIE IN PAID ADS,” Legum tweeted when he broke the story last week.

That’s ironic, given the Senate committee’s new report, which includes yet another proposal for legislation that would require social networks to become more accountable for the political ads they run, including disclosing who is paying for them.

Nearly three years into revelations about Russia’s use of social media to influence U.S. elections, none of that legislation has passed. 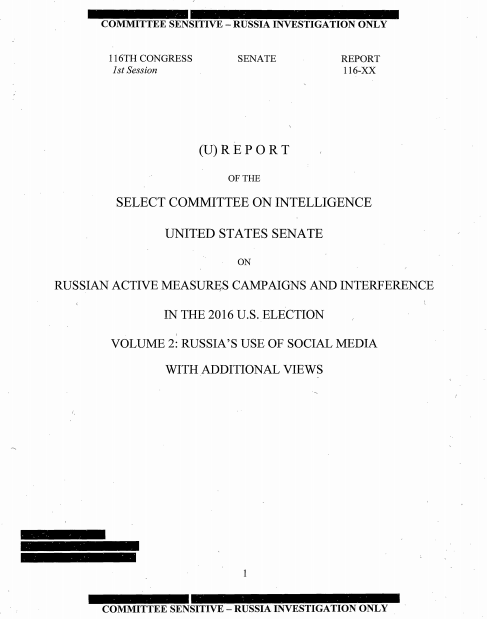 Facebook tells me its policy is that Trump (and other political figures) CAN LIE IN PAID ADShttps://t.co/4aTevXJIwr