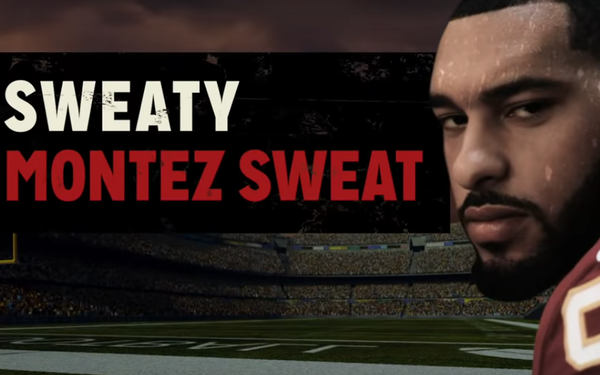 Old Spice, always looking for new ways to connect with an increasingly elusive demographic, is looking for a beef.

With a new campaign that both mocks and mimics political attack ads, it’s created a fictional vendetta against rookie Montez Sweat, a linebacker with the Washington Redskins.

Old Spice bills itself as the “Official Sweat Defense of the NFL,” hence the campaign’s irrational crusade against Mr. Sweat.

It broke the ads last weekend, as Washington battled Miami, earning its only win so far this season.

P&G says the ads are already notching up more than 15 million views on YouTube. Wieden+Kennedy is the ad agency.

So far, P&G has effectively dragged in Von Miller, linebacker for the Denver Broncos, with more NFL personalities on tap to take part in the faux-feud in the weeks ahead.

And in keeping with the nasty “paid for by the ….” gotcha format of political ads, it’s got rebuttal ads, too. (“He claims Sweat is just his last name.")

Travis Kelce, tight end for the Kansas City Chiefs, is also lined up for a part in the effort, too, and P&G is promising “a cadre of actors, entertainers and comedians to chime in on social media.”

He says that the campaign will continue on all social media platforms. “The beef has only just begun, and in the coming weeks, we’ll see increased conversation with a couple of surprises along the way,” he tells Marketing Daily, “including a very passionate plea from one avid Montez Sweat supporter who may or may not share the same last name.”

The campaign is a playful way to acknowledge the tense political times, without being at all political. Coupling the current “beef” culture -- think Cardi B versus Nicki Minaj or Baker Mayfield versus Antonio Brown --“ with our own take on the political ad style, we knew we could capture viewers’ attention with a funny twist designed to entertain, bring levity to today’s current climate and fuel social conversation,” says Krehbiel.