It's Disney's World, And The Rest Of Us Just Live In It 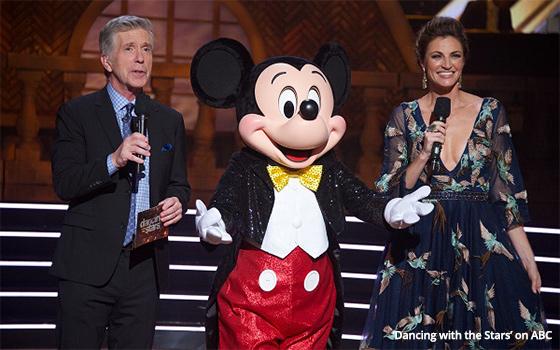 The entertainment colossus that is The Walt Disney Company was on full display this past Monday night on ABC.

That was when the entire two hours of “Dancing With the Stars” was given over to promoting Disney+, the new Disney subscription streaming service launching next month.

Sure, there was a dance competition wedged in-between the promo spots and on-screen bugs announcing the upcoming debut of Disney+ scheduled to go live on Nov. 12. And there were commercials for products other than those being promoted by Disney.

But the competition was beside the point. As it happened, this installment of “DWTS” was the one that the show has every season in which the lineup of dance performances has a Disney theme.

This made it the perfect occasion for Mickey Mouse to elbow his way onto the “DWTS” set (pictured above between co-hosts Tom Bergeron and Erin Andrews). Other Disney icons made the scene also -- including Minnie Mouse, Goofy and Pluto.

In fact, in one scene when Andrews was trying to interview one of the performing couples as they awaited their scores, the costumed Pluto character kept insinuating himself physically into the scene -- like one of those obnoxious fakes who harass tourists in Times Square.

The promos and on-screen billboards informed those who were watching that Disney+ would soon be here. They gave various tastes of what the world can expect on a streaming video service brought to them by Disney.

If there was a tentpole attraction, it may have been the new “live-action” version of the old animated Disney classic from 1955 “Lady and the Tramp” -- the one with the romantic scene in which two cartoon dogs shared spaghetti.

This new version -- complete with a live-action spaghetti scene that was shown in an elaborate trailer during “Dancing With the Stars” -- will be available only on Disney+.

This is Disney's power: The company arguably owns the world's best-loved film and video content, and has these brands at its disposal to launch a subscription streaming site that has the potential to instantly transform the SVOD industry.

How? Simply by being Disney -- the one place in the streaming world that has so much attractive content that subscribing to other services might strike many as superfluous.

The fledgling Disney+ Web site -- Preview.Disneyplus.com -- tells the story. Right up front, the landing page has the start date (complete with countdown clock) and the price: $6.99 a month, or $69.99 per year (an annual savings of $13.89 over paying by the month).

Go on the site and behold the constant variety of Disney content -- everything from Marvel, “Star Wars” and Pixar to “The Simpsons” and National Geographic.

Not only is Disney's library of content vast and world famous, but Disney is also pouring billions of dollars into producing scores of originals for its streaming service under all of its franchise umbrellas. All that, and a new “High School Musical” too.

The price feels right, and the content on offer is familiar to everybody and liked by almost everybody too. The strategy seems to be, at least in part: Look at everything we will have to offer you. There is so much of it, that you will no longer even have time to watch the other services.

Result: Disney+ is the only streaming service you and your family needs. (Plus -- and this was not mentioned on the site's landing page -- a $12.99 monthly subscription option will reportedly be offered that will include not only Disney+ but the ESPN streaming service, ESPN+, and Hulu, in which Disney is now the majority owner.)

Disney+ is shaping up to be a huge success for The Walt Disney Company. And let's face it: Was there ever any doubt?