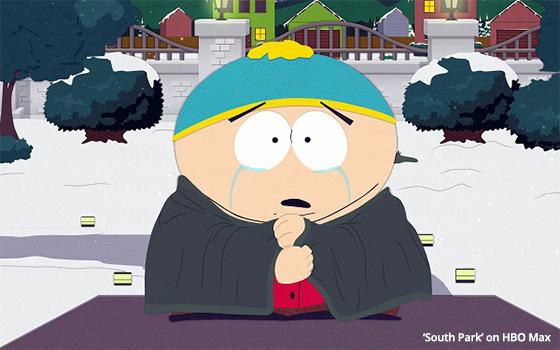 HBO Max is apparently so big that it took nine press releases to announce it on Tuesday.

That's right -- nine press releases popping into my email inbox in quick succession, with a 10th missive sent as an advisory with instructions for how I could watch a livestream of WarnerMedia’s presentation announcing HBO Max from Burbank.

The first release to arrive ballyhooed the news that HBO Max had obtained the “exclusive streaming rights” to all 23 seasons of “South Park” (pictured above) plus three new seasons after that.

Then came the other releases with the following headlines, starting with: “HBO Max Unveils New and Reimagined Classic Kids & Family Series from the WarnerMedia Portfolio” (including Looney Tunes and Hanna-Barbera properties); "Greg Berlanti Announces New DC Projects for HBO Max -- 'Strange Adventures' and a 'Green Lantern' Inspired Series" (he is the producer of "Arrow," "The Flash" and "Supergirl" on The CW); and "HBO Max Announces Three New Projects from Elizabeth Banks, Issa Rae and Mindy Kaling During WarnerMedia Day" (this was the name WarnerMedia gave its presentation extravaganza).

The final release was the big one -- the one that wrapped up all the announcements in one package. The headline was "WarnerMedia Unveils HBO Max" followed by six subheads.

Then there were: “HBO Gives Series Order to HOUSE OF THE DRAGON [caps theirs], Co-Created By Ryan Condal and George RR. Martin; Ryan Condal and Miguel Sapochnik to Partner as Showrunners” (all co-creators of "Game of Thrones") and "Existing AT&T HBO Customers and HBO Now Direct-Billed Subscribers to get HBO Max at No Additional Cost."

It was a lot to take in, a lot to go over, a lot to think about and comprehend. And that was likely the point.

This collection of announcements was likely meant to say: Look at us -- we are WarnerMedia, and behold the great variety of what we own (HBO, Bugs Bunny, Team Coco and more) and what we have the clout to buy ("South Park," Ridley Scott’s first-ever TV series and others).

This company's holdings are so vast and go back so far that you half-expected a press release mentioning Humphrey Bogart and Jimmy Cagney.

If the cascade of press releases was meant to represent and hammer home the sheer tonnage of what the company can provide in its everything-but-the-kitchen-sink streaming service, then the strategy worked. It was impressive.

The HBO Max subscription price happens to match the one that HBO Now subscribers currently pay, so WarnerMedia may have reasoned that this price point will work even better for HBO Max, which offers so much more than HBO Now, but at the same price.

The attention being paid in recent days to HBO Max, in the wake of its multi-tiered announcements this week, and Disney+, which is launching later this month, has already claimed a casualty in the streaming wars as Sony, realizing it could not compete, threw in the towel on PlayStation Vue.

When the inevitable shakeout occurs, the giant entertainment companies with the most to offer -- such as Disney and WarnerMedia, for example -- will survive. Others -- such as Apple TV+, to mention one subscription streamer that is likely doomed -- will not.