This Pinot's For You: Anheuser-Busch Brings Wine In A Can To NFL 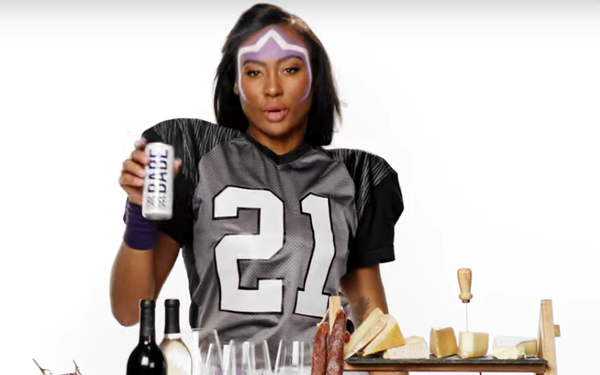 Anheuser-Busch, so famous for the beers it advertises during televised sports events and sells in stadiums, is branching out — to wine.

It will begin selling Babe, the canned wine it acquired earlier this year, at 12 NFL stadiums. It is also now the official wine sponsor of the NFL.

Founded by Josh "The Fat Jewish" Ostrovsky, and brothers David Oliver Cohen and Tanner Cohen, Babe became famous for its shrewd presence on social media and for not taking itself seriously — at all.  The wine’s popularity spawned YouTube videos, too.

“Building on Anheuser-Busch’s long-standing relationship with the NFL, we have seized a unique opportunity for Babe to become the football wine the world has been waiting for,” said David Oliver Cohen in a statement.

Because canned wine is portable, it can be easily consumed in the stands and at tailgate parties. Portability is a big selling point for other canned wines on the market as well.

A new Babe commercial introduces the wine’s association with the football league. A pretentious wine snob sniffing knowingly at high-priced wines gets blindsided by a football player.

It turns out the fully clad player is Kayla Nicole, who Budweiser describes as an “on-camera host and girlfriend of Kansas City Chiefs tight end Travis Kelce.”  As a tagline, she says, “Babe: How football does wine.”

It got the attention of Anheuser Busch InBev in 2018, when it acquired a slice of the company through its global growth and innovation group called ZX Ventures.

This summer it bought the rest. Reportedly, Ostrovsky and the Cohen brothers have stayed involved with the enterprise.

One of Babe's strongest selling points for Anheuser-Busch may be that it’s not beer. Millennials are drinking less beer, except some craft brews, and are turning toward wine and hard liquor products.Babe has a 12% alcohol content, more than twice as much as Budweiser’s 5%.

Babe also bases a lot of its appeal on style. “The New York-based company’s portfolio of photogenic and delicious rosé, pinot grigio, and red sparkling canned wine has made Babe the most photographed wine on Instagram,” its says in the press release about the NFL deal.

Though there’s not a lot of history to Babe, there is some. The idea for Babe grew out of another canned wine brand, White Girl Rosé, spun from the book, “White Girl Problems” and two follow-ups, all authored by Babe Walker.

The author is an impossibly self-centered New Yorker described as ”a painstakingly manicured white girl with an expensive smoothie habit, a proclivity for Louboutins, a mysterious mother she's never met, and approximately 50 bajillion Twitter followers.”

She is actually a fictional character created by the Cohen brothers.