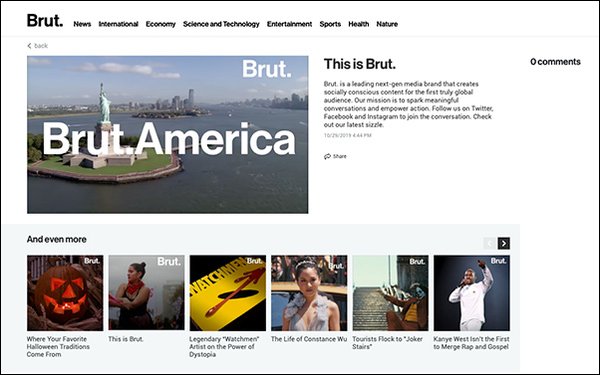 Global digital media brand Brut. has officially launched in the U.S., while simultaneously announcing it has raised approximately $40 million in Series B funding.

Brut. will use its latest monies to build its American operations with an eye on future expansion.

Brut. approaches news geared to millennials and Gen Zs through a focus on “positive social dialogue around key issues,” Guillaume Lacroix, founder-CEO of Brut., stated. “Our editorial tackles the topics that are most important to them: social impact, the environment, accountability for power, and women and minority empowerment.”

The media brand was founded in 2017 and is headquartered in Paris. Its audience comes from more than 57 countries and it reports engaging with a global audience of 2 billion millennials and Gen Zs. Last year, Brut. counted 10 billion video views.

The company generated 1.1 billion views in September 2019 across all of its platforms, including Facebook, Instagram, and Snapchat. Brut. reports it generates 250 million unique monthly views, 3 billion monthly impressions and 30 million daily active viewers.

Having partnered with brands like Netflix, Airbnb, Ralph Lauren, Nike and LVMH through custom-brand partnerships, Brut. claims 76% of its millennial readers purchase a product after viewing a Brut. ad video.

This round of funding was led by Red River West and blisce/. Aryah Bourkoff, founder-CEO of LionTree LLC, and Eric Zinterhofer, a founding partner of Searchlight Capital Partners, also invested.