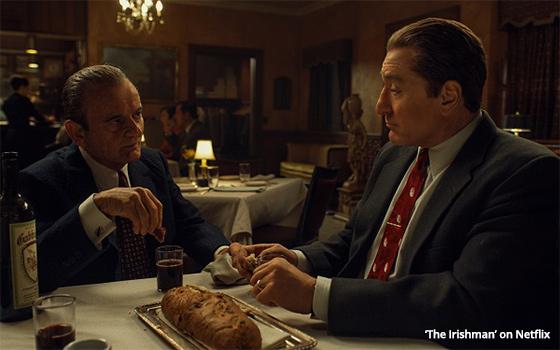 For fans of gangland cinema, there are three movies at the pinnacle of the mafia movie pyramid to which all others are compared: “The Godfather” (1972), “The Godfather Part II” (1974) and “Goodfellas” (1990).

Some aficionados also include a fourth movie, 1995’s “Casino,” in this list. Like “Goodfellas,” the movie starred Robert De Niro and Joe Pesci, who had also starred as gangsters in “Goodfellas.” “Casino” was so violent that even Martin Scorsese said he was shocked by what he saw -- and he directed it.

He directed “Goodfellas” too, and now, in what might be considered the third leg of a Scorsese-De Niro-Pesci mafia trilogy, Scorsese has directed “The Irishman,” a movie that brings these three icons of mafia moviemaking together for the third and probably last time in a gangster picture (Pesci and De Niro are pictured above in a scene from the movie).

In a now-bygone era, the pending release of a film of this caliber would have been the moviegoing event of the year -- especially among the “Godfather” and “Goodfellas” faithful, a group comprising millions of people.

And maybe many of them will flock to theaters this month to see “The Irishman,” although they will have to do so in a limited number of cities at a relative handful of largely independent theaters where the movie was released Nov. 1.

This is because the major theater chains refused to show “The Irishman” because it is scheduled to turn up on Netflix on Nov. 27, less than a month after its release. Netflix reportedly financed the movie, whose budget has been reported at $159 million.

According to trade reports, this narrow “window” between the movie's theatrical release and its availability in homes was unprecedented and therefore unacceptable. And to put it bluntly, the theater chains hate Netflix because the streaming service is keeping their customers at home watching TV rather than going out to the movies.

As a result, look at what happened: A new gangster movie directed by one of our most revered moviemakers and starring the premier icons of mafia movies from the past half-century -- plus Al Pacino, star of the “Godfather” movies -- will hardly be seen at all in movie theaters.

Instead, it will likely find the lion’s share of its audience on television. Imagine that -- a Martin Scorsese blockbuster that will be more popular as a television attraction (where it will be available far longer) than as a theatrical feature.

And to think: Scorsese himself was widely quoted recently decrying the prevalent trends in Hollywood moviemaking and distribution in which theaters increasingly crave big-budget comic-book hero adaptations at the expense of the sort of “cinema” Scorsese has produced and directed since the 1970s.

And now, here is Martin Scorsese making a big-budget gangster movie that will essentially be a TV movie. It is another sign of how much the movie and TV businesses have changed -- that TV, as represented here by the leading subscription streaming service, has overtaken the movie business as the place to find quality movies by the likes of Martin Scorsese.

What's next? “The Godfather Part IV” directed by Francis Coppola exclusively for Netflix?