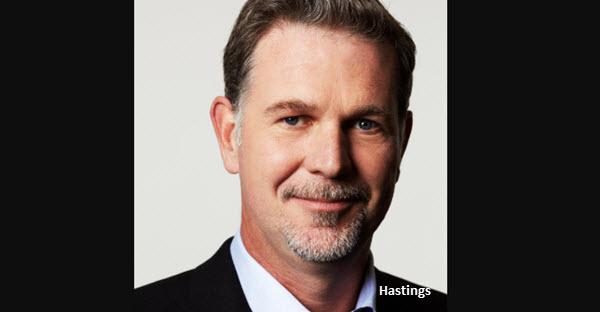 While coverage of the video streaming wars tends to focus on comparing services’ existing and targeted subscriber counts,  viewing time will be the real make-or-break metric, argues Reed Hastings, CEO of Netflix — the well-established leader, with a current global subscriber count of 164 million.

“Time will be the real competition,” Hastings said during yesterday’s New York Times DealBook Conference, per CNBC, which videoed his comments.  “You’ll hear some subscriber numbers, but you can just bundle things, so that’s not going to be that relevant. So the real measurement will be time — how do consumers vote with their evenings? What mix of all the services do they end up watching?”

“There will be some more competition for us, but we’ve already got a lot of competition,” Hastings added, noting that Netflix, YouTube, Hulu and Amazon Prime Video all launched in 2007 or 2008, and have been competing for more than a decade now. “And people will watch less linear TV, and now watch, say, Disney content on the Disney+ service.”

Most consumers will subscribe to “a couple” of services, he believes. (A scenario that reflects the current status, according to U.S. adults’ own reporting in one new survey.)

“I don’t think that subscribers or cumulative media spending is going to go down,” Hastings concluded. “Linear TV is a huge revenue and time source that’s declining, and that’s fueling the growth of all of the internet sources."

Hastings also reemphasized his maxim that streaming services compete not just with one another, but with all of the activities that now command consumers’ time, including video games and sleep.

Nielsen and other measurement services are likely to begin releasing viewer data early in first-quarter 2020, he said.

Speaking of going up against Disney, he noted that Netflix’s new offerings include “The Irishman,” “The Two Popes” and the new season of “The Crown”—quality content that speaks to its focus on pleasing its customers.

“That’s what Disney does, too,” he said. “Disney’s been doing creative content for 100 years, and they’re incredibly good at it. They’re $80 billion in revenue, we’re $20 billion. And we’re both focused on how do we win viewing time from you by doing incredible work, telling stories that you all care about.”

He noted that all companies can learn from Disney when it comes to entertainment content, adding that he’ll be a Disney+ subscriber himself.

Asked by moderator Andrew Ross Sorkin whether Netflix can continue to let subscribers cancel any time, particularly given longer-term subscription efforts by Disney and others, Hastings said that Netflix focuses on how it can offer a service that “people want more of the time — not on how to lock people in… When you’re in front of the TV and you think, ‘Do I turn on cable, do I turn on YouTube, do I turn on Netflix?,’ we want you to choose Netflix.”

Asked if Netflix and competitors will have to scale back at some point on the huge investments now being made in content, Hastings replied that, to the contrary, “We plan on taking spend up quite a bit.”

Netflix has been “strong in series, now we’re getting strong in movies,” and pumping up investment in areas including animation and unscripted shows, he added.