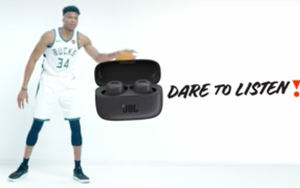 Antetokounmpo has made a few JBL commercials over the years. In September 2018, JBL announced it was extending its relationship with top NBA stars and teams. Along with Antetokounmpo,, two-time NBA All Star Andre Drummond, three-time NBA All Star Kemba Walker and Hall of Famer Shaquille O’Neal get their tunes via JBL headphones.

But JBL is competing against Apple-owned Beats, which last year took the NBA “official headphones” designation away from Harman-owned JBL, which had the NBA’s ear since 2014.

Beats has superstar LeBron James and other big names in its headphone-wearing camp. The Beats deal also includes arrangements with the WNBA, USA League and instructional leagues the NBA operates. Some teams still have separate deals with JBL.

In the new ad, Antetokounmpo, with his headphones working, daydreams he’s in the recording studio  with Swoope and it’s all so transfixing, the Milwaukee Bucks star is oblivious to instructions from his trainer in the gym.

It will be showing on television and on digital platforms as of Monday, and print and out-of-home ads are also in the marketing mix.

As  a worldwide ambassador, which is what JBL calls him, Antetokounmpo is a good choice. Though his parents are Nigerian, they settled in Greece before Antetokounmpo was born and he was already a basketball star there before he moved to the U.S. in 2013. He’s nicknamed “The Greek Freak."

Headphone-makers seek athletes (and leagues) for endorsements because in locker rooms, in public and even in pre-game on-field practice sessions, it’s common to see stars listening to tunes.

While sports stars are still important endorsers of athletic shoes, headphones are still products with product innovations, so some consumers pay attention to what their favorite celebrities are listening on.