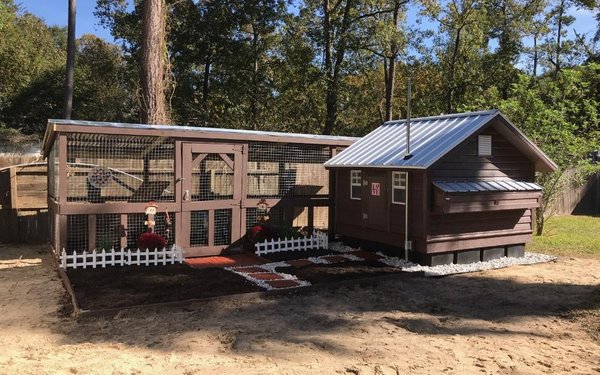 Purina Animal Nutrition is pushing itself to extend beyond product lines to do good with its new Project Re-Coop.

Since 1970, the number of disasters worldwide has more than quadrupled to around 400 a year, according to the company. The ramifications of these disasters are felt in many ways, including by pet and livestock owners.

Sharai Poteet is one such consumer. The Houston resident lost her entire flock of chickens not once but twice -- during hurricanes Harvey (2017) and again this year with Imelda.

Through Project Re-Coop, Purina will donate a custom-made chicken coop that floats in rising waters to Potent. Spang created the time-lapse video of the coop’s construction.

The coops are made via recycled feed tubs, which Purina will now accept and process from customers (this encourages safe disposal and thorough recycling of materials often not accepted by consumer-facing recycling facilities).
.
Every action the company takes is inspired by a single purpose, helping to unlock the greatest potential of every animal, says Matt Fanta, vice president of marketing at Purina Animal Nutrition.

“While nutrition plays a major role in this mission, we realize in times of hardship, even the greatest of animals and their caretakers need an extra hand,” Fanta tells Marketing Daily.

“When it comes to celebrating our brand story across our marketing communications, we are continuing to focus more on showing vs. telling," Fanta continues. "Brand acts like these are intended to showcase the human side of our brand and build stronger connections with our current and future generations of customers.”

Purina is sharing step-by-step design details so other chicken enthusiasts can create their own floatable chicken coops, in addition to those Purina will produce. Chicken owners will be able to visit the Purina Square 125 website and download the designs starting Dec. 2.

Purina Square 125 is a platform that addresses pressing consumer challenges, aiming for solutions that go beyond new product launches.

The hope is that Project Re-Coop will ignite a larger conversation, says Jerry Hoak, executive vice president and executive creative director at The Martin Agency, Purina’s agency. “If Purina can create simple backyard coops that float, what else is possible -- and how can we use this type of thinking to save other animals?” Hoak asks.