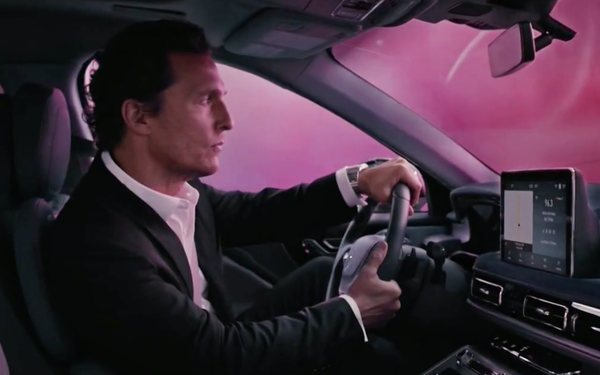 Experiential marketing and social media/influencers are generating buzz, but automakers still count on the tried and true 30- and 60-second TV spots to move metal.

Automakers spent an estimated $530.1 million on TV ads during October, an increase of 13.18% from September’s $468.4 million, according to iSpot.tv. Toyota spent the most, an estimated $47.9 million, per iSpot.tv.

The most-seen spot, with 1.3 billion impressions, is the creative from Hudson Rouge for the 2020 Lincoln Aviator, "Fresh Take On Movement" featuring Matthew McConaughey. Love them or hate them, it’s undeniable that the McConaughey ads get people talking, and watching, to see what the actor might do next.

Similar to September, automakers prioritized spend during football Sundays, and as a result, those days also saw spikes in impressions for the industry.

Hyundai was the No. 3 brand for spend overall during the month, but on Sundays, it outspent the other brands — although that didn’t always translate to more impressions, according to iSpot.tv. Nissan continued its trend of opting for college football Saturdays.

Sports-related programming took six of the top 10 placements when it came to impressions generated. Also notable is that while Fox & Friends had much lower spend than the other shows in the top 10 (an estimated $196,867), it was No. 8 on the list for impressions.

Given the football focus, it makes sense that Sundays and Saturdays were the top two days of the week delivering impressions for automakers. The primetime daypart dominated by a mile (9.19 billion impressions), with weekend afternoons (3.47 billion) and early fringe (2.69 billion) in a distant second and third, according to iSpot.tv.

One of the top performers, a Chevrolet spot  "J.D. Power Dependability Awards: Real Presenters"' generated 882 million TV ad impressions with an iSpot Attention Index of 121, meaning it received 21% fewer interruptions than the average auto ad, and an iSpot Attention Score of 94.50.