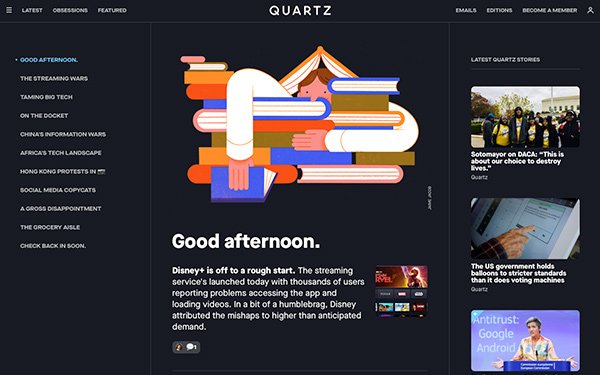 For the first time, Quartzhas announced the number of paying members it has attracted since launching the program a year ago: 10,438.

The data point was part of the third-quarter earnings report from parent company Uzabase. The Japanese business-media company acquired Quartz from Atlantic Media in July 2018 for $86 million.

Though Uzabase revealed a 56% year-over-year increase in revenue across the company through the first three quarters of 2019, Quartz’s revenue was down 7%, compared to last year over the same period.

This was primarily due to a decline in digital advertising, CEO Zach Seward wrote in a note to staff Tuesday morning.

Quartz redesigned the homepage and iOS app last month, too.

“There is so much to be proud of in our early results. Membership is a huge new initiative for us, requiring significant shifts by every part of the organization, which you have all successfully embraced,” Seward wrote.

Quartz members pay $15 per month or $100 per year for unlimited access to articles, exclusive field guides and shows.

Quartz added a metered paywall to the site in May.

“Building this new business is a long-term proposition, and we are just getting started,” Seward continued. “Over the next year, we’ll focus even more of our time and attention on this initiative. Integrating member features into all of Quartz, improving our ability to convert loyal readers into members, and increasing the value of membership until it’s a bargain.”

Seward noted that while “some of our competitors will cite larger numbers of subscribers based on cut-rate discounts,” the company is "valuing Quartz membership more than that" and charging members a higher price.

“It will pay off in the end,” Seward wrote.