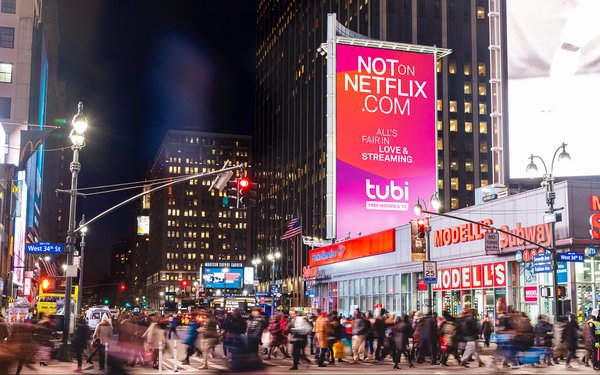 One commercial features Noth, with much guilt, speaking to a psychologist about leaving longtime HBO: “I mean, HBO was my first love... It’s so confusing, the Max, the Go, the plus, the double plus....I’m going to add Tubi.”

Terrence Howard struggles to shake off past roles still haunting him, but finds freedom and relief with Tubi. “Tubi has what is not on Netflix. It seems too good to be true, right?”

Carmen Electra confesses to a psychologist about commitment issues: “I never knew a relationship could be so fulfilled and ask for nothing in return until I met Tubi.”

Emily Jordan, head of marketing for Tubi, says it's a perfect time for this kind of messaging, with heavy branded streaming wars in full swing.

The campaign will run for six weeks, starting today. Jordan says this is the first time Tubi has partnered in a marketing campaign with major TV talent.

Jordan says the overall theme is a focus on TV consumers still confused about which new streaming pay TV services to buy. Tubi “is the prescription for subscription,” she says.

Video commercials will run on connected TV platforms, digital and social platforms, including YouTube, Facebook, and Instagram. in addition, Tubi will do heavy out-of-home media in Los Angeles and New York.