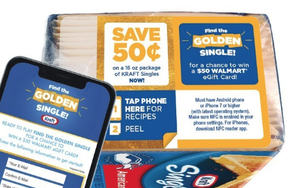 When Kraft wanted to introduce a new line of salad dressings recently at Walmart, it knew it risked getting “lost in a sea of similar offerings,” Josh Burns, associate director of shopper marketing for the company’s Walmart team, said in a case study by Field Agent. “Getting a brand new item with only a few facings to stand out seems like an insurmountable task.”

Field Agent’s Digital Demo mobile app program draws upon more than a million shoppers, whom the company refers to as “agents,” incentivized to purchase specific products. Within two months of launch, there were  “thousands of purchases” of the new Kraft dressing by agents at certain Walmart stores, who provided product reviews, according to the case study.

Nearly 90% of the agents gave the dressing a rating of 7 (out of 10) or higher. Field Agent then turned their product reviews into personalized articles to be posted and shared on various digital platforms. “The high-quality social engagement that follows is a great bonus,” said Burns.

Subsequent product purchases by the agents also were tracked and verified via the company’s app. Marketing Daily reached out to Kraft Heinz for comment but had not heard back by deadline.

In September, Kraft Heinz embedded Identiv NFC tags into instant-redeemable coupon labels carrying the notation “tap here for recipes” on packages of Kraft Singles in Walmart stores. People who tap the label with their phone activate the NFC technology, which opens their default web browser to display recipes.

After a purchase of Kraft Singles, opening the package activates a second NFC-enabled experience in which buyers can play a scratch-and-win style mobile game with the potential to win a $50 Walmart e-gift card.

“So far, Walmart has provided Kraft cheese with premium floor space in the stores due to the NFC features and increased the number of stores that the promotion was in,” says Stigall. “Early results show a correlation between stores with increased sales lift in the product and the stores that featured the NFC program.”

Asked about the use of NFC instead of QR codes for promotions, Stigall notes that QR codes “are easily faked and can be used to launch fake mobile websites.” In addition, each NFC chip has its own code that “brands can identify and launch a unique experience for each individual package” based on time of day, store location, phone type and other NFC programming rules.

In addition to Identiv, NXP Semiconductors and TPG Rewards were involved in the Kraft Singles project.