Comcast Brings E.T. Back To Earth For Blockbuster Xfinity Ad 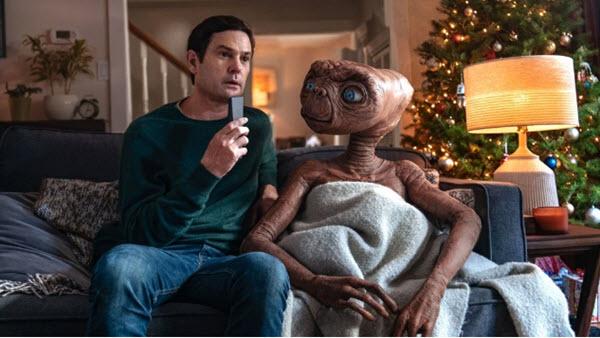 Demonstrating another reason that it’s good to be the owner of a massive content library, Comcast is out with a blockbuster long-form ad for Xfinity that’s also a Stephen Spielberg-approved sequel to 1982’s “E.T. the Extra-Terrestrial.’

Comcast’s Universal Pictures owns the rights to the movie, as well as the Xfinity cable, broadband and satellite business.

The full, four-minutes-plus ad (below) debuted during the Macy’s Thanksgiving Day Parade broadcast on Comcast’s NBC, and ran between showings of the original movie on Syfy on Thanksgiving evening.

A two-minute version aired during the NFL games broadcast on Fox, CBS and NBC over the course of the holiday.

Comcast will also run the ad across broadcast and cable networks, online and in social media and cinemas — and it can be called up by Xfinity customers who say “E.T. phone home” into their voice remotes, reports Variety.

In addition to the nine different versions of the ad that will air in the U.S. through Jan. 5, Comcast will run versions promoting its Sky satellite service (instead of Xfinity) in the U.K., Germany and Italy

In the ad, E.T. returns to visit his original earth host, Elliott, who’s now a grown-up (and played by the same actor, Henry Thomas) with his own family.

Henry and his family teach E.T. how to use the internet, call up holiday movies and use VR goggles with their Xfinity system, in addition to frolicking with him in the snow and recreating the famed flying bicycles scenario.

However, the word “Xfinity” doesn’t actually appear until the logo is shown at the ad’s end, along with the only ad copy/tagline: “Reconnect for the Holidays.”

No word as yet on the cost of this blockbuster ad, which was created by Omnicom Group’s Goodby, Silverstein and Partners.