Netflix Leases Endangered NYC Art Cinema For Its Own Use 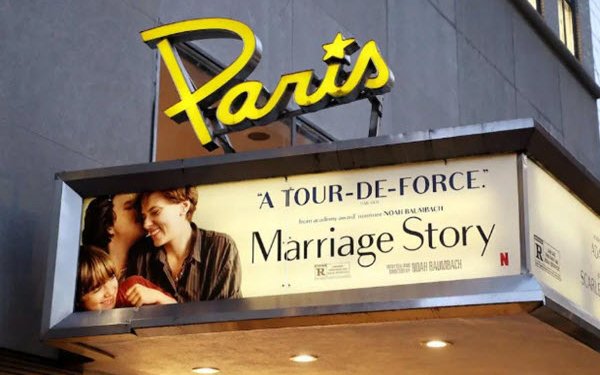 The streaming boom may not be doing a lot of favors for the traditional movie business, but at least for now, it’s saving one of New York City’s most iconic movie theaters.

Netflix has agreed to lease the Paris Theatre, located on 58th St., across from the Plaza Hotel. The lease terms were not released.

The Paris, opened in 1948, has been one of the few theaters to focus on showing art and foreign-language films, and is the last single-screen cinema in the city. The theater had closed this past August.

Netflix will use the theater for theatrical releases of its original films — Noah Baumbach’s “Marriage Story” is showing now — as well as for other screenings and special events.

“After 71 years, the Paris Theatre has an enduring legacy, and remains the destination for a one-of-a kind movie-going experience,” stated Ted Sarandos, Netflix’s chief content officer. “We are incredibly proud to preserve this historic New York institution so it can continue to be a cinematic home for film lovers.”

Netflix and other streamers need to show their films in at least one Los Angeles-based brick-and-mortar cinema for at least seven days in in order to qualify for Academy Awards eligibility.

Netflix is apparently already taking steps to take charge of never having to fret about meeting that requirement, via its reportedly pending multimillion-dollar purchase of another iconic cinema, L.A’s The Egyptian Theatre.

Netflix has reportedly also explored the possibility of acquiring Landmark Theatres and other movie chains.