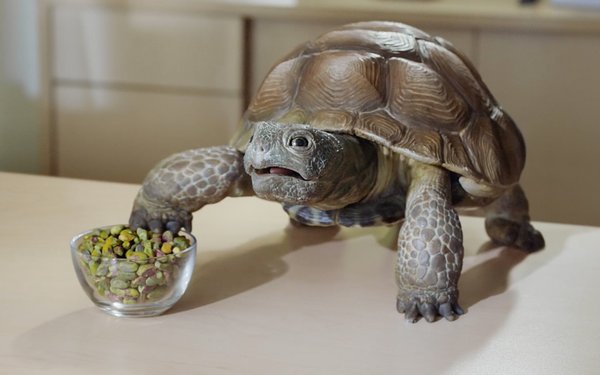 The Wonderful Company is investing $15 million in a new campaign to raise awareness for Wonderful Pistachios' No Shells brand.

The campaign marks the first time that the No Shells pistachios brand is being advertised on TV.

The “Almost Everyone Loves No Shells” campaign, developed with the company's in-house agency Wonderful Agency, differentiates no shells versus shell nuts through Sheldon, an outspoken tortoise who mistakenly believes the company is eliminating all shell-backed things.

In the first spot, Sheldon is seen arguing with advertising executives who try to convince him their No Shells ads were just a big misunderstanding. They were only trying to promote pistachios without shells, not tortoises without shells.

The campaign will be amplified by a large-scale social and digital campaign, print, public relations and influencer marketing starting now and running through 2020.

As for the creation of Sheldon as the brand spokesperson for the no-shells variety, Chief Creative Officer Bobby Pearce explains that, for one thing, he is cute. More importantly, Sheldon cuts through the ad clutter to build No Shells into a separate brand from the company’s shell-on variety. "We only have 15 seconds to convey that message, so we needed to be very clear about the shell or no shell distinction."

As such, added Pearce, an easily recognizable and fun character appeals to a broad consumer base, ranging primarily between ages 35-65. Sheldon's name, similarly, easily plays off the Shell joke while his voice and mannerisms dovetail nicely with his curmudgeon personality. “Our measure of success will be introducing a line of plush Sheldon products next year,” jokes Pearce.