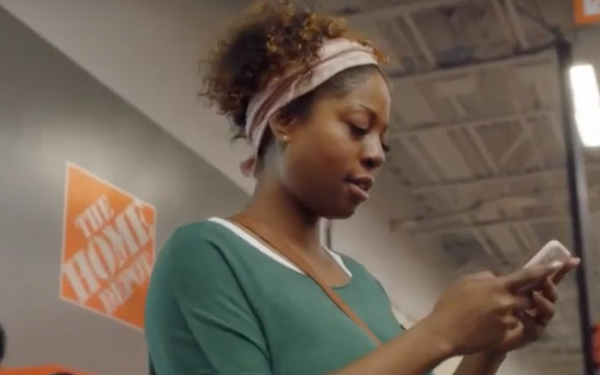 In a presentation for investors and analysts, Craig Menear, chairman, CEO and president, showed off the ads, which introduce a brand-new tagline for the Atlanta-based DIY giant: “How doers get more done.”

“We changed the tag line to strongly signal Home Depot is evolving as our customer needs change,” he says in the webcast.

The company also announced its 2020 sales forecast, predicting a gain of about 3.5% to 4%. That news disappointed some investors, who had expected a prediction of 4.3%. And it was all the more disconcerting since the company had previously lowered its 2019 estimates.

Menear acknowledged the numbers were lower than expected. “Some of the things are harder than we’ve anticipated,” he says.

Despite its ecommerce strength — it is now the fifth-largest digital commerce company in the U.S. — the push to complete its three-year One Home Depot vision has hit snags that plague other retailers in the quest for seamlessness.

“One of the complications is that we can’t present a consolidated view to the customer,” Menear says. A single item can appear as many as three different SKUs: one in stores, one online, and one in its maintenance repair operations.

“When we solve that underlying problem, then we can drive significantly greater leverage and more value. We were maybe a little too ambitious in our thinking,” says Menear.

He adds he is confident that ultimately, the company’s extensive investments in stores and digital improvements will translate to sales.

Some analysts agree, even if they are uncertain about how long that might take. Home Depot “has been one of the most forward-thinking retailers, investing in these areas for years,” writes Seth Basham, an analyst who follows the retailer for Wedbush Securities.

“And it is 'confident’ that the investments it is making to support its interconnected One Home Depot experience will address evolving needs of its customers and build on distinct competitive advantages that will enable market share gains and extend leadership over the next few years.”

But since the company is not providing its usual three-year outlooks, “it is more difficult to see returns on the investments it is making.”

The new ads highlight the company's digital strengths, including its app, pickup lockers and Pro B2B website. The new slogan replaces “More Saving. More Doing.” Both campaigns are from the Richards Group, based in Dallas.