The Other Streaming War: Live Gaming

Over the past few months, the “streaming war” between the Netflixes, Disney+s, and HBOs has occupied the attention of the mainstream traditional media. As soon as I saw a brand new Star Wars show on Disney+ and Baby Yoda, I knew they had me pinned (but I'm still using my parents' Netflix
-- don't you worry).

But away from the attention of traditional media folks, another streaming war in the same time period has exited its cold war phase and entered full on open war. I'm talking about the war between for the domination of the video game streaming space -- specifically between Twitch, YouTube, Mixer, and even Facebook.

For those who don't know, Twitch (owned by Amazon) is the market dominator of the live-stream gaming scene. With 15 million daily active users, it is by far the largest live-gaming viewership platform.

What's more, it manages to reach audiences that are drifting further and further away from the reach of platforms like linear TV -- 55% of Twitch's audience is 18-34, and you can bet that a large percentage of the remaining users are even younger.

However, Twitch's direct competitors, while still nowhere near posing a serious threat, are on the rise. 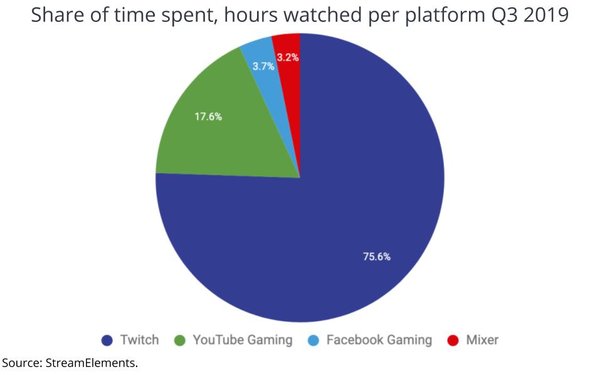 According to StreamElements, Twitch accounted for 75% of live-stream viewership hours watched in third-quarter 2019. Things were not much different earlier this year either.

In the past few months, all four platforms have made moves on each other by poaching away content creators. Most notably, in August, Tyler “Ninja” Blevins -- Twitch's most popular streamer boasting 14 million followers -- moved over to stream exclusively on Microsoft's platform Mixer.

Since then, a number of content creator tosses and transitions have ensued. Mixer brought over Twitch's streamer Shroud with 7 million followers, while Twitch solidified multi-year exclusive streaming deals with some of its top talent, including Benjamin “DrLupo” Lupo and Timothy “TimeTheTatman” Betar, with 3.5 and 4 million followers, respectively.

The list (while hard to follow) isn't exhaustive, but it gives a sense of the scope and intensity of the back and forth that has really taken off just in the past quarter alone.

It took Twitch a while to build the empire and platform that it has, and I don't see Twitch losing its throne anytime soon.

Mixer's acquisition of Shroud and Ninja had barely any effect on the landscape. As it stands, Twitch is still synonymous with live esports and live gaming.

However, the real potential for competition with Twitch, I think, comes from YouTube. In many ways, YouTube “Let's Play” videos are the precursor to Twitch. People have been filming themselves playing video games and putting them up on YouTube for a long, long time.

Right now, about 17% of gaming content is live. The other 83% is found primarily video-on-demand style on YouTube. Almost all the popular streamers, Ninja, Shroud, DrLupo, etc. have YouTube channels where they post highlight reels and more.

Yes, it might not be live, but it reaches millions of subscribers. Ninja has 22 million subscribers on YouTube, which is more than his Mixer and Twitch presence combined.

That being said, Twitch stands to gain a lot of new ground in the next few years, outside of gaming.

With sports broadcasting rights up in 2021, Twitch has the potential to continue to expand and revolutionize the way we watch sports. In a recent interview for Sports Pro, Twitch Strategic Partnerships Manager Farhan Ahmed said that it is aiming to apply its “live multi-player viewing experience” to more traditional sports.

At the moment, Twitch stands atop the mountain of live-game content, but YouTube represents a serious challenger to the space, with Mixer and Facebook Gaming trying to make a stand as well.

Regardless of how the back and forth goes, marketers and advertisers have to understand that “cord cutters” and “cord nevers” are gravitating to live streaming platforms like Twitch and YouTube.

Gaming has risen as a dominant form of entertainment, and with Twitch's efforts in live sports, viewership experiences are going to change, sooner rather than later.