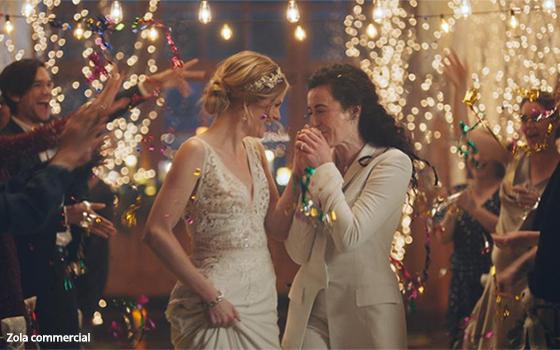 Hallmark Channel pulled the TV advertising from Zola, a wedding service company, after a pressure group started a campaign against the network. However, Hallmark kept running other TV creative from Zola.

Citing its efforts around diversity and inclusion, Mike Perry, president-CEO of Hallmark Cards, stated: “Our mission is rooted in helping all people connect, celebrate traditions and be inspired to capture meaningful moments in their lives. Anything that detracts from this purpose is not who we are. We are truly sorry for the hurt and disappointment this has caused.”

For its part, Hallmark Cards sells LGBTQ greeting cards and has featured LGBTQ couples in its TV commercials.

Hallmark Channel originally pulled the Zola TV commercial with these statements to The New York Times last week: “We are not allowed to accept creatives that are deemed controversial.” It added the decision is “not to air overt public displays of affection in our sponsored advertisement, regardless of the participants.”

Hallmark Cards says it will be working with GLAAD to better represent the LGBTQ community across our portfolio of brands.

Perry added: “Across our brand, we will continue to look for ways to be more inclusive and celebrate our differences.”