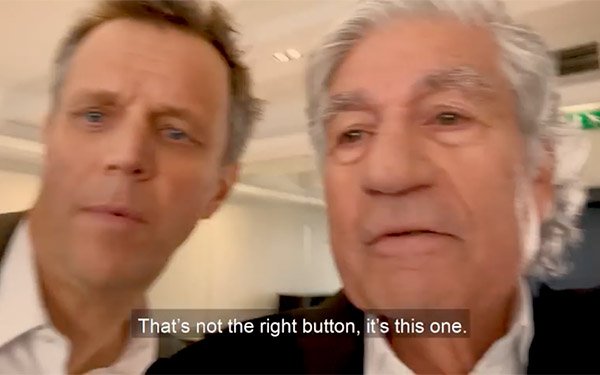 Publicis Groupe executives are once again entertaining the industry with their wry humor and comedic talents for its annual holiday greetings video. As you can probably guess, it co-stars CEO/Chairman Arthur Sadoun and (spoiler alert) Chairman of the Board Maurice Levy.

Sadoun opens with a monologue explaining that in a world where anyone, anywhere, can make snackable, shareable, on-brand content on a budget, he is filming this year's holiday message with just a smartphone and his assistant.

As he talks, the cameraman is shown to be slightly incompetent with blurry images and fingers covering the lens, among other goofs.

At the end the “cameraman” is revealed to be Levy as he reverses the phone’s camera lens to focus on himself.

This production underscores the continuing close friendship between Sadoun and his “assistant.” This clip was based on an original idea by the two. Levy not only makes his directorial debut, but also serves as director of photography, producer, post-producer, editor, and SFX.

The Groupe amusingly notes the responsible agency was "definitely not Marcel Paris."

The Groupe’s end-of-year holiday wishes videos have become a tradition that have gained an industry following looking for a laugh.