How Anti-Semitism Happens Programmatically, And In Real Time 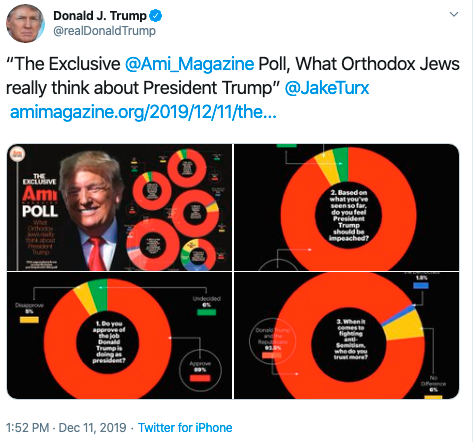 Apologies if today’s RTBlog isn’t technically about technology, but it is about something happening in real time and, I believe, programmatic at some level.

It’s about a slow-rolling, creeping anti-Semitism that has been fueled over the past few years, which is manifesting beyond simple hate speech into murderous attacks on Jewish Americans.

The real-time nature is what we watch play out on TV news and social media when the attacks manifest -- whether it is the one yesterday in Monsey, NY, or the one a couple of weeks ago in Jersey City, NJ, or the one a little more than a year ago at the Tree of Life synagogue in Pittsburgh.

Ironically, these attacks have been waged against Orthodox Jews, the ones that the very same Administration fueling much of the anti-Semitism professes is part of its base.

Just a couple of weeks ago, the President tweeted a poll conducted by Ami Magazine finding that 89% of Orthodox Jews approve of the President. It also found that 92.5% trust the President and “the Republicans” when it comes to fighting anti-Semitism.

The President tweeted the poll the same day he signed an executive order reclassifying Jewish Americans as a distinct nationality. The White House said the order was made to protect Jewish Americans, but the move reinforces the notion that Jews are “the other,” which is the underlying root of anti-Semitism.

The day after the order, two gunmen attacked a Kosher supermarket in an Orthodox Jewish community in Jersey City.

I understand why Orthodox Jews support the President and Republicans. They are, by definition, conservative. They also align with the Administration’s pro-Israel stance and policies.

Whatever their identity, American Jews are experiencing more anti-Semitism. According to the New York City Police Department, reports of anti-Semitic crimes are up 63% this year vs. last year, and they have been rising in recent years.

The fans fueling anti-Semitism aren’t just coming from Washington, but also from -- of all places -- The New York Times. On Friday, the paper published a column by Bret Stephens about “The Secrets of Jewish Genius,” which included tropes many believe to be anti-Semitic.

On Sunday, the Times revised the original version of the column, removing a citation to a 2005 paper that “advanced a genetic hypothesis for the basis of intelligence among Ashkenazi Jews,” explaining: “After publication Mr. Stephens and his editors learned that one of the paper’s authors, who died in 2016, promoted racist views.”