2019 Was Year Of White Claw Seltzer -- For Some, Trend Hard To Swallow 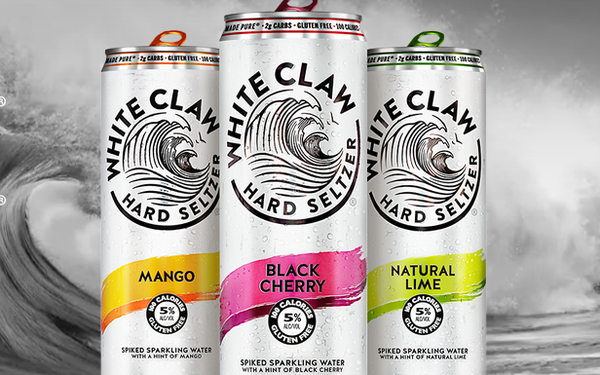 Consumers have a history of flocking to things they really know nothing about. In the last few years, examples of that phenomenon may include vaping, Impossible Burgers, Peter Buttigieg — and, well, probably Donald Trump.

And most of all, White Claw hard seltzer, which in 2019 became so immensely popular that in July, it declared, possibly legitimately, that there was a nationwide shortage. There are plenty of sites that now market White Claw merchandise.

“We are working around the clock to increase supply given the rapid growth in consumer demand. White Claw has accelerated faster than anyone could have predicted.”  Sanjiv Gajiwala, White Claw's senior vice president of marketing, told CNN in September.

Yet consumers know diddly about it, really, and in parts of the middle of the country,  White Claw is still about as foreign as a decent bagel.

Yet White Claw seems unstoppable. It was introduced in 2016, but did nothing much until this year when the company predicted sales of $1.5 billion by the time the big ball drops in Times Square. It’s produced by Mark Anthony Brands, once better known for Mike’s Hard Lemonade.

White Claw was helped immensely by viral videos on social media, from which sprang the phrase, “Ain’t no laws when you’re drinking Claws.”

It has some attributes young drinkers were reportedly seeking: relatively fewer carbs than beer, for one, and it’s easily mixed with hard liquor, especially vodka. And it doesn’t take itself seriously.

An essay in The Atlantic, entitled "White Claw Is What Happens When Being Cool Becomes Exhausting,” positions the product against the craft beer movement, which the article says depends on knowledge of quality hops or what makes a good IPA, and hundreds of beers with funny names and labels.

“White Claw’s appeal, meanwhile, is that it rejects standards,” the magazine’s Amanda Mull writes. “Hard seltzer is exactly what it sounds like: fizzy water in a can with a pinch of sugar, a dash of fruit flavor, and roughly the same amount of alcohol as light beer.”  Even the plain-Jane can design rejects the beauty of craft beer cans.

As Vox notes “it’s a beverage whose existence makes so much sense for so many reasons, and feels so perfectly positioned in this particular period of time, that it has helped define what exactly this period is.”

White Claw has a nearly 70% share of the hard seltzer market.

But it seems that to much of the general public, White Claw is still a big unknown, possibly because hard seltzers like White Claw, Truly (from Boston Brands, maker of Sam Adams beer) and Bon & Viv (from Anheuser-Busch InBev) are rarely sold in bars and restaurants.

In 2019, the emerging popularity of hard seltzers has changed the landscape. Now even craft beer makers are making seltzers, and Molson Coors is going to stop calling itself a “Brewing Company” and in 2020 becomes the Molson Coors Beverage Company.  It is introducing Vizzy, a 5% alcohol-by-volume, 100-calorie hard seltzer it says is “infused with super fruits.”

And, no doubt, beer drinkers will continue to hate the trend. Asked by the  website Vinepair.com what he’ll remember about 2019, Greg Koch, co-founder of craft beer maker Stone Brewing, replied,  “Every year has its throwaway trend, but this year it is apparently extra special. 2019 will be remembered as the year of hard seltzer…. Admittedly, it’s likely the perfect drink for people whose best night of their lives was prom.”

alcohol, beverages
1 comment about "2019 Was Year Of White Claw Seltzer -- For Some, Trend Hard To Swallow".
Check to receive email when comments are posted.
Next story loading