Consumer Tech Sales To Hit $422B This Year: CTA 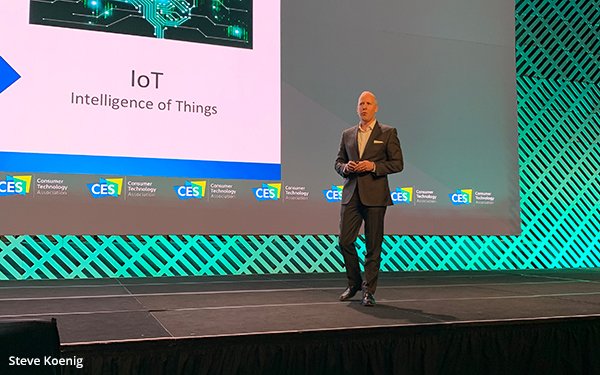 That’s part of the latest forecast from the Consumer Technology Association (CTA), presented by Steve Koenig, vice president of market research at CTA, at the opening of CES in Las Vegas.

The report, projecting 4% growth from last year, reflects U.S. factory sales to dealers for more than 300 tech products and related software and services.

Even more significantly, the amount of spending on software and streaming services including music, video and video gaming, is projected to reach a record high of $81.2 billion this year, up 11% over last year.

Driven by original content, consumer spending on video streaming is forecast to $24.1 billion in 2020, an increase of 29%

On-demand music services, such as Apple Music, Spotify and Pandora, are projected to total $9 billion, up 15%, and video gaming spending is forecast at $38.3 billion this year, increasing 5% from last year.

Nearly 67 million earbuds are expected to be sold this year, increasing 35% and earning revenue of $8.2 billion, up 31%.

Sales of smart home devices, such as smart doorbells and locks, smart thermostats and smart smoke detectors, are expected to reach 35 million units, increasing 15%, for revenue of $4.3 billion, a 4% increase.

Pushed along by upgrades, smart speaker sales are projected to reach 39 million units, an increase of 5% from last year, for revenue of $4.2 billion, up 4%.

About 20 million 5G smartphones are expected to be sold this year, for revenue of $15.3 billion.

As the most popular personal computing device, laptops are expected to ship 53 million units, up 1%, for revenue of $33.3 billion.

As the flagship technology in many homes, televisions are expected to ship 41 million units for $23.4 billion in revenue.

Factory-installed, in-vehicle technology is expected to grow by 6% to $18.5 billion in revenue, with more manufacturers including advanced driver-assistance systems (ADAS) such as automatic emergency braking into their vehicles.