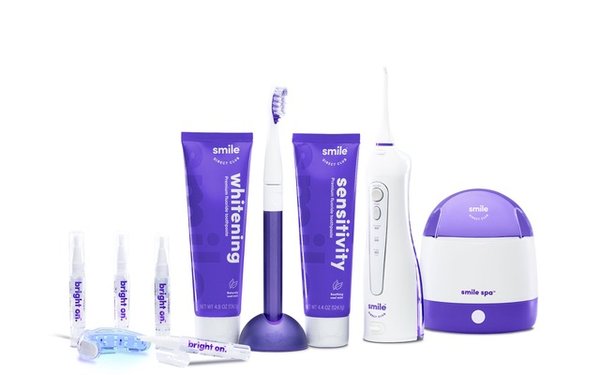 The new oral-care products are rolling out to some 3,800 Walmart stores. The line includes an affordable electric toothbrush (priced at about $25), a whitening kit with LED lighting, toothpaste, a water flosser and an ultrasonic UV cleaner, which sanitizes aligners and retainers.

“We’ve been thinking about this type of expansion since the company began,” says Josh Chapman, chief global brand officer. “One goal is brand awareness. Not everyone is thinking about straightening their teeth all the time, but they brush their teeth every day.”

He tells Marketing Daily the company’s research has found that people who whiten their teeth are also more open to the idea of straightening.

Chapman says that for Smile Direct Club, hooking up with Walmart for the launch “was a no-brainer,” allowing it to offer premium products at a low price. Smile Direct was launched in 2014 as the first major player in teledentistry, which can include virtual consultations and high-tech monitoring of patients.

Chapman is particularly bullish about the way Walmart is displaying the products, both with endcaps and by grouping them in a single shelving area -- a simplified approach that will help the company reach people who are overwhelmed by the many choices among toothpaste, brushes, floss and whitening products.

And exclusively on its website, the company is also introducing a Club version of the electric toothbrush and a replacement subscription, a direct swing at newcomer Quip.

Many D2C brands are moving toward physical retail for new growth. “We’ve never thought of Smile Direct Club as a D2C brand. We’re an end-to-end brand,” Chapman says. “Whether it’s been our pivot from impression kits to CVS SmileShops to our SmileBus, we’re just listening to customers.”

In its most recent quarterly results, revenues rose 50.6% to $180.2 million, an increase of 50.6% from the same period in the prior year. It shipped 106,100 unique aligners, up from 72,400 in the comparable period. Its third-quarter net loss swelled to $88.3 million, from a loss of $14.9 million, due in part to the company's decision to more than double marketing spending.