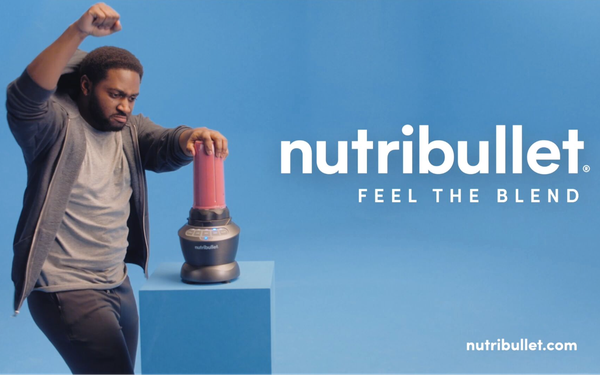 NutriBullet is launching an online effort aimed at consumers who are aiming to live healthier in the new year.

The ads, created by Humanaut, are running on YouTube, Hulu, Facebook and Instagram. Additional creative elements are currently in the works, according to a NutriBullet spokesperson.

Creative introduces a “revolutionary new fitness program” called BulletFit. In a series of short spots, the campaign pokes a little fun at the latest fitness fads and trends by treating NutriBullet’s beautifully designed, compact blenders like an innovative fitness program.

The ads feature a BulletFit class with an instructor getting people amped by telling them to “push it” and “feel the blend,” only to reveal later that this “exercise routine” is really just a way to make a nutrient-packed smoothie. The campaign is running in January as a comment on New Year's resolutions.

The effort includes the 30-second “Not a Workout” and two 15-second spots: “BulletFit Class” and “No Membership Necessary.”

Last year, the brand launched its “Feel The Blend” campaign, which demonstrated how fast and easy NutriBullet’s personal and full-size blenders are to use when compared to the sometimes over-the-top health fads and diet trends promoted these days.

“The New Year is a time when health and fitness are important goals for people and for many, starting can feel complicated and stressful,” according to the NutriBullet spokesperson. “With our new campaign, we wanted to remind people in a light-hearted, fun way that your nutrition routine is as important as your workout routine.”