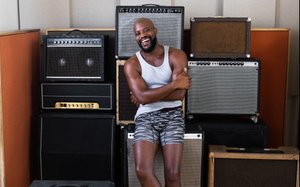 America may be used to seeing men’s underwear advertised on nameless hunks, but Hanes’ newest campaign is out to change that. Its new “Model Citizen” ads star seven regular guys, all trying to make the world a better place.

Acknowledging that the world is full of washboard-ab images of men selling undies, “we wanted to find some guys with cool stories and normal bodies,” says Sidney Falken, chief branding officer for HanesBrands. “And they’re not just interesting people -- they’re making an impact. That’s a fun spin to put on the word 'model.’”

These guys don’t spend their life at the gym. One is a single dad pursuing an acting and photography career. Another makes boots in Austin. And one’s brewing beer in Denver.

The all-digital effort, aimed at younger men, isn’t just a new way to look at underwear models, but a new way to shore up its D2C efforts as well. All the featured products are available on its ecommerce sites, aided by a dedicated landing page for all campaign assets.

Hanes is one of those traditional brands that is soaring on D2C efforts. In its latest quarterly results, consumer-directed sales (including its company-owned or brand retail stores and all online channels) jumped 10%, and represent 23% of total sales. On a constant-currency basis, its increase was 13%, with double-digit gains both in the U.S. and internationally.

“We are happy for people to buy Hanes wherever they want,” Falken tells D2C FYI. “And a lot of consumers like to be in stores, and touch and feel a product before buying it. That experience is still really important. But the convenience of shopping online -- not just directly from us, but from our online retail partners -- is hard to argue with.”

She says the Winston-Salem, North Carolina-based company continues to see traffic growth, especially in mobile. “So we’re trying to make sure it’s super easy to find what they want, and especially for younger guys, to see the array of our products.”

Hanes is one of the most broadly sold apparel brands in the world, and men’s underwear continues to be a fast-changing category. For one thing, women shoppers matter less than they used to, with about 69% of men buying their own, up sharply in the past ten years.

For another, styles are constantly changing. Boxer briefs continue to be the most popular silhouette, but expectations of new fabrics, colors and function have exploded.

“It’s a much more interesting category than it used to be, and men are pretty knowledgeable,” Falken says. “They’re interested in performance fabrics, moisture-wicking, cotton, blends, and mesh. And increasingly, men view underwear as a way to make a fashion statement.”