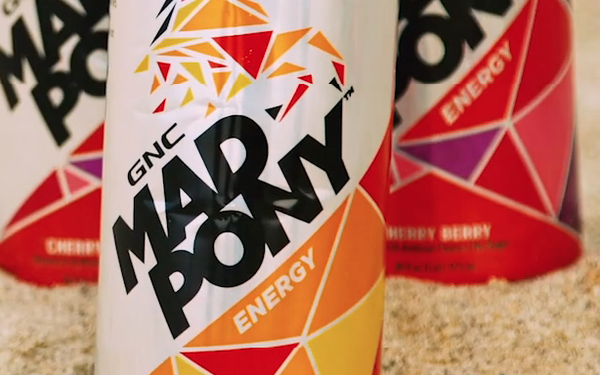 As the energy drink category girds for the entry of Coca-Cola, PepsiCo’s Mountain Dew is staking a no-sugar claim, General Nutrition Corp. has launched its Mad Pony Energy brand and caffeine is spreading to butters, snack bars and other edibles.

Mountain Dew has a raft of promotional activity in store for 2020 as the brand seeks to reenergize in the face of growing competition. PepsiCo is the only nonalcoholic beverage brand among the first 10 advertisers to sign on with Quibi, the new short-form video platform tailored to mobile devices that launches on April 6.

Meanwhile, Mountain Dew’s Zero Sugar version becomes available nationwide starting today, in another effort to propel sales growth for the brand whose roots trace to 1940 but whose current performance is “flat,” according to PepsiCo chairman and CEO Ramon Laguarta. In an October 2019 investor call, he said Mountain Dew “is improving, but it’s not to the levels that we would like to see.”

One of the challenges is that brands like Mountain Dew sit at the intersection of carbonated soft drinks and energy drinks.

“And it’s not as easy a problem to solve in terms of maintaining the relevance and the consumer high awareness for this brand compared to some of the…new trends that are happening in energy. So that’s work for us to do,” said Laguarta.

Coca-Cola Energy debuts this month and, according to reporting by BevNet, will be positioned at retailers in or adjacent to areas housing carbonated soft drinks, with the exception of Kroger, which will house it among energy drinks.

Last month, General Nutrition Corp. trotted into the energy category with the introduction of three flavors of its house brand, Mad Pony Energy, containing 200 milligrams of caffeine and no sugar.

“Our goal when creating the GNC Mad Pony Energy brand identity was to speak to the quirky and creative side of us,” John Learish, GNC’s senior vice president of marketing, tells Marketing Daily. “Every person has a different definition of what it means to live well -- and GNC Mad Pony Energy was our solution for helping motivate people to be courageous about living their authentic lives.”

According to Nielsen data provided by Monster Beverage Corp., dollar sales volume for energy drinks rose 7.9% from January to December 7 of 2019, versus the year earlier period. That compared to increases of 3.9% for sports drinks, 3.8% for bottled water, 2.6% for ready-to-drink coffee and 2.2% for soft drinks.

In the food aisles, caffeine’s presence is expanding to such edibles as snack bars, fueled by companies like The Whole Coffee Company, whose Nudge coffee bar is made from whole coffee beans with caffeine equal to one cup of coffee. In addition to Nudge — which also offers coffee butter — the company has snack food deals with the QSR chains Tim Hortons and Dunkin’.

Dunkin’s Coffee Thins, described as a “creamy coffee treat,” come in 12-packs and are made from Dunkin’s own coffee beans. Whole Coffee’s technology incorporates cocoa butter to extract 100% of each coffee bean, as opposed to the roughly 20% of a coffee bean’s flavor typically experienced in a cup of coffee, according to the company.