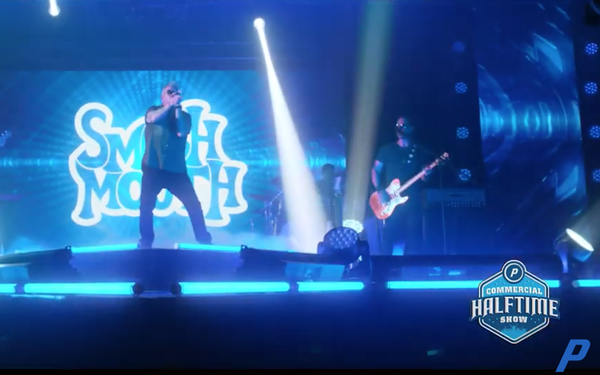 Progressive isn’t buying into the Super Bowl hype, but still plans to capitalize on the air time leading up to the game.

A spot from Arnold Worldwide broke over the weekend during the playoff games. It has its very own Super Bowl-like “halftime show” built into the ad, featuring a performance by Smash Mouth.

The insurance company hasn’t been in the Super Bowl since 1999 and has no plans to return, says Progressive CMO Jeff Charney.

“We like to zig where others zag, and running a halftime show -- in a commercial -- before the big game will allow more people to see an exciting ‘show,’” Charney tells Marketing Daily.

The commercial shows Flo talking to a couple about insurance. Midway through the spot, their living room opens up to show a stage with Smash Mouth playing. After 15 seconds of the song, the stage closes back up and Flo continues her pitch.

The spot broke this past Saturday, “when serious sports fans are paying attention and when viewership numbers are through the roof,” Charney adds.

“This approach is part of our ‘network' strategy and appeals to our ideal customers, offering relevant creative ahead of the big game by introducing the first-ever halftime show within a commercial,” Charney says. “It will be memorable and stick with you -- it’s kind of an anti-Super Bowl ad.”

The actual halftime show has long been the topic of water cooler and social media conversation on Monday morning, post-game.  The brand is leaning into the cultural relevance of these memorable performances and the resurgence of what it has coined “Memory Lane Marketing.”

“It is our approach to finding the right creative mix of characters, content and context that evoke nostalgia,” Charney says.

Smash Mouth, celebrating 20 years of the hit song “All Star,” brings back memories for millennials and Gen X-ers who heard the song when it first hit and others (Gen Z) who heard it more recently in movies or in the meme culture, he says.

“It’s an instantly recognizable tune that’s a lot of fun and makes you smile,” Charney says.