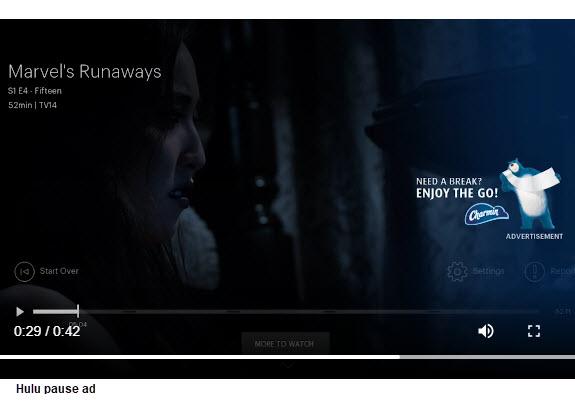 Disney’s Hulu — which has already helped pioneer innovative ad formats including pause ads (shown) and ads triggered when a binge-watching scenario is initiated — is preparing to push the envelope further in 2020.

New formats will include choice-based ads and ads allowing viewers to receive information about or buy products. Hulu is also working on a capability to digitally insert products, post-production, into its original content, reports TechCrunch.

The choice-based ads will allow viewers to select from among a brand’s ads — opting to see an ad for a ski vacation or a beach vacation from a travel service, for instance.

The transactional ads will enable viewers to get more information about an advertiser via the mobile phone numbers or emails attached to their accounts, or by scanning an onscreen QR code with a phone. The advertiser could then provide a link to its own site or a retail site for purchasing.

Helfand characterizes the ability to do paid product insertions in existing content — for instance, to insert a specific brand’s mixer into its Hulu Kitchen content — as a form of “storytelling” as another means of reducing intrusion. (No mention of how disclosure of such product placements might be handled.)

“We do think that there is a future where we’re able to fuse brands into the content, post-production,” he said, adding: “We’ve got a lot of content recognition work that’s already going on inside of Hulu which we use for lots of different reasons, not just for advertising. But there’s also a number of third parties — there’s a whole ad technology industry that’s emerging about being able to do things like that — and we’re looking at partners, as well.”