Princess For Hire: Meghan Megxits UK For US Television 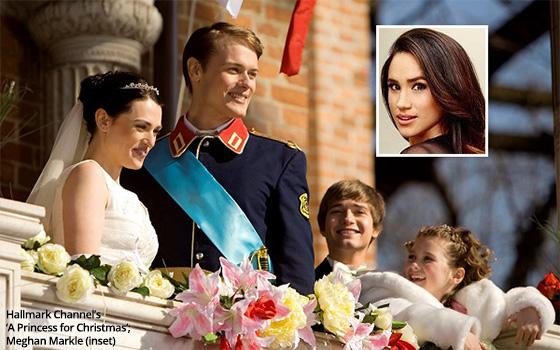 Attention, Hallmark Channel: There is a princess on the loose and she is looking for work.

It is true that Meghan Markle was never officially a princess (her title is, or was, Her Royal Highness the Duchess of Sussex). But she can now play one on TV if anyone will hire her to do so, and if she is willing to be typecast forevermore in princess roles.

Now that Markle and her husband, one-time prince Harry, the duke of Sussex, have “Megxited” from the royal clutches in which they felt so entrapped, speculation about what they will do next is swirling from the British Isles to the vast expanses of North America.

Or not. One report seen recently had Canadians issuing a collective yawn at the prospect that the Sussexes have decided to take up residence among them. But in what city? Toronto? Vancouver? Ottawa? Moosejaw? Time will tell.

Of much greater interest to the TV Blog than where these ex-royals will live is what Meghan plans (or hopes) to do now. Of the three members of the family -- Meghan, Harry and little Archie -- only Meghan has any connection to television.

When she left the USA Network lawyer show “Suits” in 2017 following its seventh season, the show was just about the only piece of TV work anyone really remembered her for.

It was not her first TV show in a career that seems to have gotten its start around 2002 (according to IMDB.com). But like Meghan Markle, many actors and actresses cycle through a series of short-lived TV shows and are rarely, if ever, remembered.

While “Suits” was successful enough on USA Network to run for nine seasons, Markle's real claim to fame is her marriage to prince Harry. How she will parlay her celebrity into relaunching her acting career is anybody's guess.

Her life has changed so much since she left the world of American television that it will be challenging indeed for her to persuade networks and producers that she is serious about taking up acting again (if this is indeed what she intends to do).

As it is, no less a source than Wikipedia refers to Markle as an “American former actress.”

The aforementioned Hallmark entertainment networks are the only entities that seem to be in the business today of making TV movies with royal themes, not only at Christmastime but at other times of the year as well.

The movies seem to have a commonality of subject matter -- a plucky and reasonably attractive (and decidedly unroyal) female protagonist meets a handsome young man under some sort of contrived circumstances, only to learn later that the young man is a prince and heir-apparent to the throne of some small fictional, European kingdom.

There was even a Hallmark movie about the courtship and subsequent marriage of Kate Middleton and prince Harry’s brother, William, the man who will someday be king. That one was called “William and Catherine: A Royal Romance.”

The real William and Kate were not in the movie, of course. But then again, they are not actors. Maybe Meghan Markle can play herself in a biographical TV movie with some actor standing in for Harry. He can be played by anybody, since the real story here is Meghan's, not Harry's.

One of the most striking aspects of this whole Megxit drama -- at least for the billions of us who are not British and therefore have no stake whatsoever in how Meghan and Harry decide to live their lives -- was how absurd this whole thing was.

Here were these very grown-up people -- Meghan, 38, and Harry, 35 -- having to publicly declare their independence from their family, as if they were being held within their ancestral walls by chains.

And not only Prince Harry's brother and father (two heirs to the British throne), but also to Prince Harry's grandmother. Who in the real world has ever had to turn up and explain themselves to their grandmother?

In America, children of this age finally deciding to leave the nest would be greeted with celebration (and a quick redo of their old bedroom into a cozy man cave).

If the goal of television is still to attract as many eyes as possible for the sake of advertising or subscriptions, then someone in the TV business ought to sign up Meghan Markle as fast as possible.

She can be available at a moment's notice. And by all appearances, so can her husband. Now that Granny has cut them off, they are going to need the money.