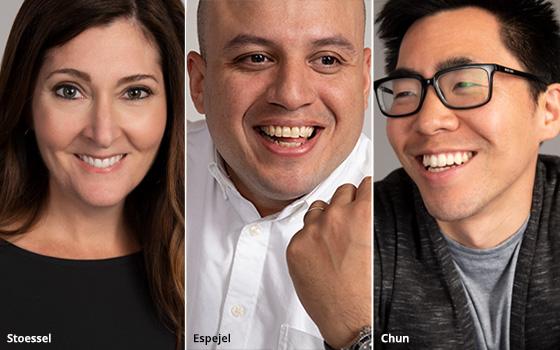 FCB Chicago is promoting three executives as part of a broader executive shuffle following the network’s September announcement to unite the network’s North American offices under one dedicated team.

Now, Fernando Espejel has been named the Chicago’s CTO, while Michelle Stoessel has been appointed the agency’s CFO. In addition, Eric Chun has been promoted to executive vice president, managing director of strategic analytics.

Espejel is credited with elevating digital product design and development work at the agency, as well as formalizing an in-network digital production offering at FCB. He was also a key driver in bringing A.I.-assisted editing to clients and new business efforts. Prior to joining the agency, Espejel was at Walgreens.

Stoessel has served as the agency’s financial controller for the past 10 years and Chun has helped define the role of data within the agency and has helped grow the Chicago office’s 100-plus strategy and analytics team.