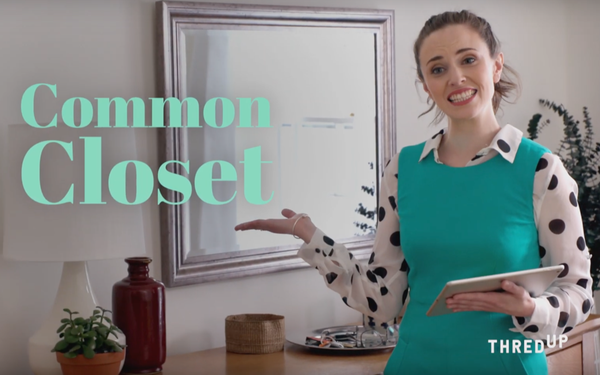 It took a baby-shower invitation to make me realize just how far the resale economy has come.

The invite steered me toward the registry of the parents-to-be, who opened their list with this line: “We always love and prefer used items over new ones.”

Sure, I’ve written about Patagonia’s Worn Wear, Neiman Marcus’ pioneering partnership with Fashionphile, and the decision of retailers like Macy’s, JC Penney and H&M to sell used clothes in their stores. And I’ve been watching the steady flow of ThredUp and RealReal packages on my porch, all addressed to the resident millennial. (I’ve even scored a few items myself.)

I’d always assumed the trend came from folks wanting to spend less dough, or as a good-scout choice for the planet.

But the “love and prefer” line puts all this resale in a whole new light: This isn’t a trend anymore. It’s the way young consumers insist on shopping.

Businesses are getting it. I wasn’t able to make it to the National Retail Federation’s Big Show this year, but attendees were buzzing about a session on circular supply chains. Speakers included execs from the Patagonia program; Yertle, the D2C company that sells used clothes from Patagonia, REI and others; and Terra Cycle’s Loop, a subscription service that lets consumers reuse packaging from major national brands, including Procter & Gamble and Unilever.

And a new report from Ike Boruchow, an analyst who follows the apparel sector for Wells Fargo, says we ain’t seen nothing yet. “We continue to believe that the consumer’s willingness to transition to resale is in the very early innings,” he writes. He notes that the U.S. resale market is about $24 billion today and growing at about 15% a year. That compares to just 2% growth for the $400 billion apparel sector.

While the RealReal, which specializes in used luxury items, is generating attention, other companies, like Poshmark, Rebag and StockX, are more compelling models, Boruchow writes. And he predicts used clothing will move from about 6% of total clothing sales to 10% of the pie by 2022.

Boruchow writes that ThredUp, the world’s largest fashion resale marketplace, has a gross market value of about $250 million, and is growing between 40% and 50% a year. In addition to partnering with retailers, it also benefits from retail partnerships, online collaborations, a loyalty program, and its “secondhand clothes, firsthand fun” positioning.

As ThredUp and other D2C brands continue to steal share from conventional retailers,  more stores will look for ways to get in on the action, Boruchow predicts. But given the digital demands of these younger shoppers, it won’t be easy.

“Looking at the market demographics, the shift to wearing someone else’s clothes is dominated by the young consumer, as it seems more and more like their natural behavior,” he writes. “As millennials and Gen Z become the core customer, growth will be more exponential.”