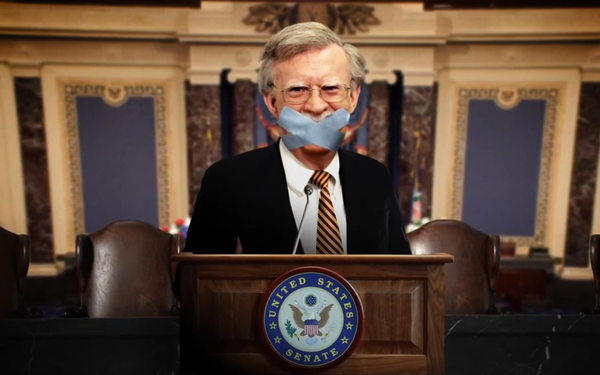 Republicans for the Rule of Law is amping up its efforts on Thursday and Friday of this week, the expected final days of President Trump's impeachment trial.

For the next two days, the group will run impeachment ads “dozens of times” in local TV commercial positions across four TV networks: Fox News Channel, CNN, MSNBC and CNBC in the Washington, D.C. area. This is part of its $1 million campaign pushing for a fair Senate impeachment trial.

One TV commercial opens with a picture of John Bolton, the former Trump national security adviser, with his mouth taped. Bolton has agreed to testify in the trial. But the Republican-controlled Senate seems unlikely to allow that to happen.

A third ad focuses on John Bolton's proposed testimony, supported by many Republican House of Representatives, who last year complained there were no first-hand witnesses to address the House charges.

The three TV spots will also air on digital platforms in what the Republican group says are key "target states" — Alaska, Utah, Arizona, Colorado, Maine and Tennessee. Those are states primarily where Senate Republicans could be facing tough re-election campaigns, coming from Democrat contenders.

The impeachment trial could end on Friday with an expected vote by the Republican-controlled Senate to acquit Trump of all charges.