The Latest Pull In The Video Game Streaming Tug-Of-War

At the moment, Twitch continues to hold the lead position for live gaming content, accounting for 73% of live gaming hours viewed in 2019, vs. YouTube at around 21%, and with Facebook and Mixer at around 3% each.

Each platform grew year-over-year (see table below), showing both a growth in the amount of streaming overall, and the results of “healthy competition” between all the platforms. 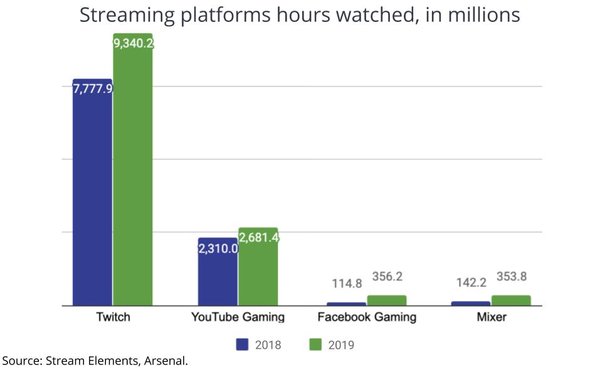 When you add that into YouTube's viewership hours, it totals up to 50 billion hours of gaming content overall. Live gaming content is still only 17% of total gaming industry viewership, compared to the 83% VOD that lives almost exclusively on YouTube.

However, VoD gaming content isn't the hot topic right now. The focus has been on live gaming and esports competitions.

For the past few years, Twitch has secured multi-year streaming exclusivity contracts with esports league providers including Riot Games’ League of Legends and Activision Blizzard's Overwatch League, giving it a continued lead in not just the world of live gaming, but especially esports.

For the first time in its history, YouTube Gaming has just announced an exclusive streaming partnership with the Overwatch League, Call of Duty League and Hearthstone League (all games and esports leagues owned by Activision Blizzard).

This is the first time that YouTube Gaming has signed over something that, in my opinion, is a serious contest to Twitch. Until now, Twitch has been the go-to partner for live streaming most, if not all, major esports events, Overwatch League having been one of them.

What's more, Activision Blizzard will get to tap into the power of YouTube's parent Google. Their gaming cloud will host all of the infrastructure for Activision Blizzard's esports competitions, and provide a global footprint, advanced data analytics, and even artificial intelligence capabilities (more info to follow) to the live events.

The timing could not be better, as Activision Blizzard's Call of Duty League (CDL) had its opening weekend Jan. 24th-26th, which debuted all of the league's twelve teams competing for a $250,000 prize.

Like Activision Blizzard's Overwatch League, CDL will be one of the few other esports leagues attempting to follow a localized franchise model with 12 professional teams (that paid a hefty $25m buy in to play in the league) across 11 markets in NA and EU.

Although the most recent Call of Duty title has sold more than 300 million copies and the franchise itself has been the best-selling game for nine of the past 11 years, there has been a lot of skepticism as to whether or not CDL will really lift off the ground.

Based on reports about the opening event, fans who were present were very satisfied, but its global presence and viewership were lacking.

So, while the jury is still out on the success of the Call of Duty League itself, YouTube Gaming stands to gain a lot of ground from its partnership with Activision Blizzard in the “friendly four-cornered tug-o-war” between Twitch, YouTube Gaming, Mixer, and Facebook Gaming.

With franchises and streaming talent more willing to leave Twitch, and with YouTube gaming attempting to gain more ground in esports broadcasting, who will strike the next blow?