It's Not Just The GDP, Stupid 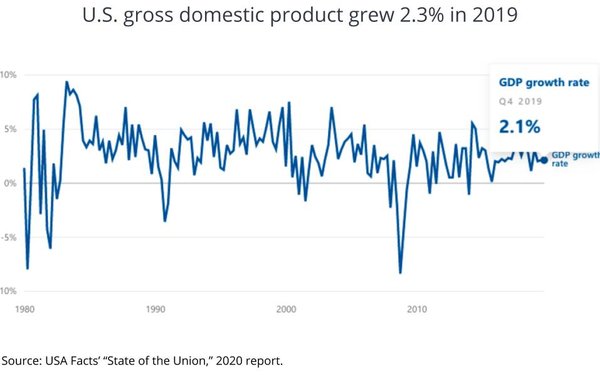 While the U.S. GDP grew 2.3% in 2019 -- the weakest of the three years of the current administration -- it’s on line with the recent historical average since we pulled out of the 2018 recession.

But the GDP doesn’t tell the whole story. On the bright side, America’s unemployment rate is at its recent low.

On the downside, many Americans remain under-employed and their wages are not growing significantly to keep up with the economy.

Median wages increased just 0.1% on an inflation-adjusted based from 2017 and 2017, the last period USA Facts has data for.

The report is worth perusing for a couple of reasons. One, because it is a good primer for what the President will say in his prime-time address Tuesday night. The other is that USA Facts is the baby of former Microsoft CEO Steve Ballmer, who founded it three years ago so that Americans had an easy-to-access and clearly delineated snapshot about the major statistical facts representing this country.

The rest, as they say, is spin -- especially in an election year.

Perhaps the most damning part of the report is what has happened to the U.S. budget.

While federal revenues grew just 2% in 2019, federal spending expanded 6%, creating a nearly a trillion dollars deficit, and boosting the national debt to nearly $23 trillion in 2019.