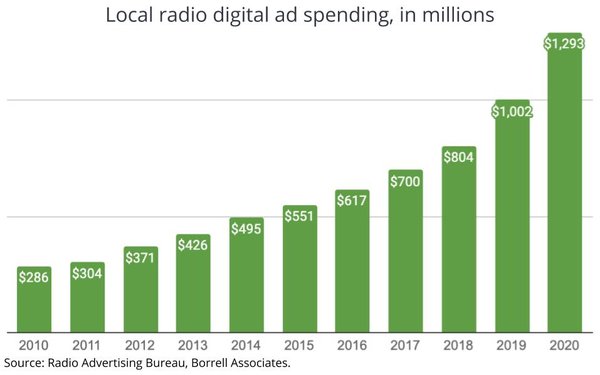 Radio is sitting pretty — digital ad revenue has topped $1 billion, according to the Radio Advertising Bureau and Borrell Associates. Local radio stations' revenues grew 25% in 2019 and are forecast to grow 29% this year, the report says.

The findings are part of RAB-Borrell's “Digital Sales Skyrocket, Hitting $1 Billion” study. It analyzes online ad revenue from 3,488 radio stations, as well as survey responses from 1,006 local radio buyers and a survey of 208 radio managers.

While over-the-air ad sales rake in the majority of radio revenue, radio is scoring with digital ad options, from streaming ads to online banners and video ads.

Digital now accounts for 10% of total advertising revenue for the industry.

In fact, 70% of stations are selling digital services, up from 62% last year, per the report. Plus, 47% of radio buyers are planning to buy a new form of marketing — and 66% are more likely to purchase a new type of digital marketing.

Stations are also investing in podcast platforms and monetizing their social-media followings.

“The radio industry is carving out large chunks of the digital advertising pie from other print and broadcast competitors that also sell digital marketing to local businesses,” stated Gordon Borrell, CEO of Borrell Associates.

The annual report showed the average station made $299,213 in digital revenue in 2019, and the average market cluster $1.3 million. The average revenue for the top five performers ranged from $664,651 for top performing clusters in the smallest of markets to $17.1 million in the largest.

“As radio continues to gain renewed interest by advertisers and the media-buying community, they are recognizing radio's assets beyond broadcast,” stated RAB president-CEO Erica Farber.

This article has been updated to reflect 2020 statistics, not included in an early version, which mistakenly cited 2019 numbers.