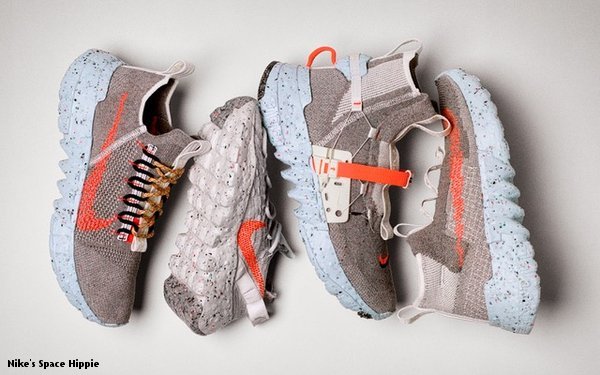 Looking for new ways to sell sustainability, Nike is launching the Space Hippie, a line it hopes will draw attention to climate change. It made the introduction as it unveiled its summer Olympics lineup.

Calling the Space Hippie collection an “exploratory” line, Nike says items are constructed from “space junk,” or scraps from its manufacturing floors. The company claims this is its closest step to a completely circular design, with the lowest carbon footprint yet.

This was just the latest example of athletic brands turning up the volume on environmental responsibility.

With elections looming and Australian wildfires burning, Nike says it is tapping into a growing sense of urgency about climate change. Experts say the efforts represent a higher level of purpose-driven marketing, with an emphasis on consumer-facing innovations as well as behind-the-scenes manufacturing improvements.

Research from NPD Group “shows that a substantial portion of younger consumers remain very concerned about sustainability and some are willing to pay more for sustainable products,” Matt Powell, NPD’s senior industry advisor for sports, tells Marketing Daily. “We have also learned that these consumers want their brands to take a visible stand on social issues. So making products out of sustainable or reused materials makes a lot of sense.”

And while there’s no “single factor that one can point to explaining why there is so much activity [in this arena], companies are being hit from virtually every direction with feedback that stakeholders want to see progress made in our collective fight to avoid destroying the planet in the next fifty years,” says David Hessekiel, president of Engage for Good.

"It is heartening to see a jump in the number of high-profile products being launched,” he tells Marketing Daily. “I think that this is just the tip of the (unfortunately melting) iceberg.”

In Cone Communications’ recent survey, 26% of Gen Z respondents say addressing climate change and threats to the environment is their No. 1 concern, up from 20% in the 2017 study.

The Nike collection launched at its Nike 2020 Forum, an event linked to New York Fashion Week. The apparel, which will be worn by athletes competing in the Tokyo 2020 Games, includes high-tech performance shoes and clothing.

This year’s Olympics will provide a challenge for competitors, and is likely to be the hottest summer games on record. Nike claims its new products offer “real solutions for the barriers all athletes face under rapidly changing climate conditions.”

U.S. medalists are set to take the podium in Nike’s 100% recycled polyester pants and the Nike Air VaporMax 2020, made from recycled manufacturing material. Runners are expected to don the Nike Air Zoom Alphafly NEXT% and two new Nike Air Zoom pods, with additional foam.

(News came down last week that the company has escaped a ban from the governing body of track and field competition for its Vaporfly shoe, “the chosen footwear of the world’s fastest marathoners but one that has drawn scrutiny for its performance-enhancing effects,” according to The New York Times.)

Rival Adidas has also become more of a sustainability showoff: Leading into Super Bowl coverage in Miami, it donated a football field to Miami Edison, a local high school. Made entirely of recycled plastic bottles, it’s the latest in its long-running partnership with Parlay for the Oceans.