The Super Bowl's Other Political Spots 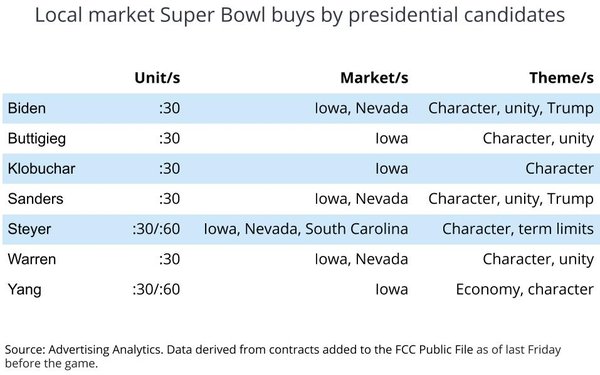 Michael Bloomberg's 60-second spot and the President's two :30s may have gotten all the attention in this year's Super Bowl, but according to an analysis by political advertising tracker Advertising Analytics, most of the Democratic contenders were in the Big Game, albeit on a local market basis.

Mostly the units focused on each candidates' character, although some explicitly addressed they were the best option for defeating the incumbent President.

Data on ad prices were not available for all candidates at press time, but Advertising Analytics confirmed that Klobuchar spent $18,000 on a spot on KDSM in Des Moines and $15,000 on KPTH in Sioux City, while Sanders spent $20,000 on KFXA IN Cedar Rapids.