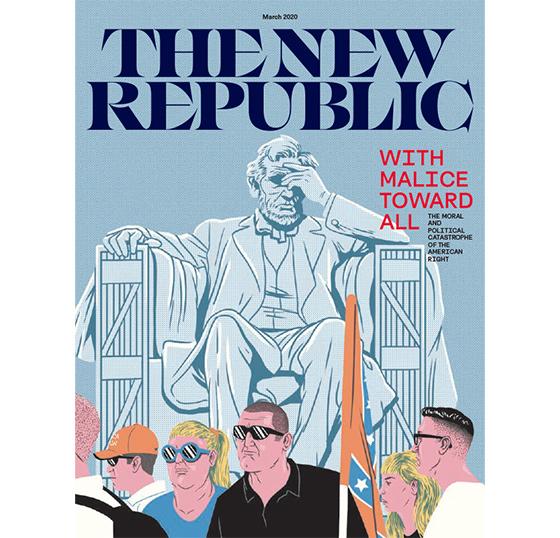 The New Republic is debuting a new look, coinciding with the launch of a politics-focused podcast and a metered paywall.

The redesign will premiere in the March issue, with a new logo, typography, layout, photography and illustration.

While it’s a “visual makeover” for the magazine, the redesign also has a “strong editorial message at the heart of it. The New Republic was created to address industrial capitalism and the rise of consumer culture… and in many ways we are facing many similar challenges in the age of Donald Trump," editor-in-chief Chris Lehmann told Publishers Daily.

The New Republic has been around for more than 100 years, and now the bolder visual identity says to readers: “We must pay attention to this,” Lehmann said. It "conveys a sense of urgency."

The new look was created in partnership with design and branding firm Pentagram.

The metered paywall, which will have a soft launch in the next week or so, will begin with allowing visitors three articles to read for free. If readers sign up for a newsletter, they get three more articles before they are asked to subscribe.

Publisher Kerrie Gillis said those numbers are flexible; they will adjust the paywall based on reader behavior. She believes the magazine will attract new audiences in 2020.

A digital subscription will cost $20 a year, and a print and digital bundle will cost $30 in the U.S.

The New Republic has been actively hosting a number of events to attract an audience younger than its usual readership, which Gillis said is introducing a new segment to The New Republic brand.

The paywall, which costs less than $2 a month, “will drive revenue, but keep the doors open for new readers,” she said. “We know what’s happening to the advertising community, and how much more difficult it is to obtain advertising dollars."

With the presidential election around the corner, “this is the right time to do this,” Lehmann said.

Two weeks ago, TNR launched a podcast called "The Politics of Everything." The first episode, hosted by Laura Marsh and Alex Pareene, examines whether its socially responsible for millennials to have children at a time of climate crisis.

What makes this podcast different from the numerous politics-focused audio shows launching ahead of the 2020 presidential election?

“We don't view politics in a vacuum — is it actually about ideas. We want both [hosts] Laura and Alex to engage with it at that level,” Lehmann said. “Debating the ethics of having children in the age of climate change” is very different from topics other politics podcasts might cover, he said.

The redesign to The New Republic’s website will launch at the end of April, with designated verticals on topics such as climate change, national politics, and inequality and identity. The new verticals also provide an expanded business opportunity for the magazine brand, Gillis added.

“We can go after those market segments ... and create newsletters around these verticals, and talk to advertisers about the targeted group of people interested in that topic,” she said.