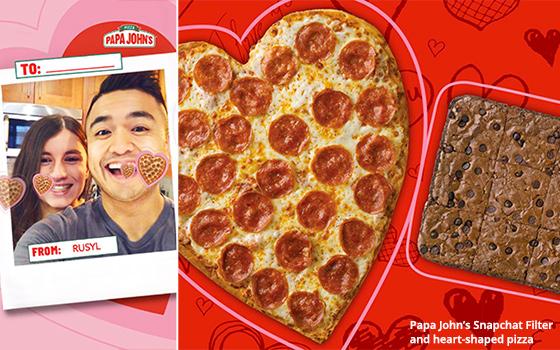 What does a brand get in return for running a Valentine’s Day-inspired campaign on Snapchat?

If you’re Papa John’s, you get a big boost in ad awareness along with sizable pizza sales.

In response, more than one-quarter of users who swiped up on the Papa John’s Lens went on to buy a Valentine’s Day pizza.

Also, 60% of Lens views unlocked with the Snapcode were from unique users, while the campaign led to a 6% lift in ad awareness among Papa John’s customers.

Pleased with its original performance, Papa John’s has tapped Snap Inc. to run a similar campaign, this Valentine’s Day.

The success of the campaign is attributable to several factors, including Snapchat’s solid popularity among younger users, along with the continued popularity of its augmented-reality technology.

On average, more than 75% of Snapchat’s community uses its augmented reality features on a daily basis.

Despite missing earnings expectations for the fourth quarter, Snap Inc. still did well during the period. For the quarter ended December 31, Snap reported revenue of $561 million, up 44%, year-over-year.